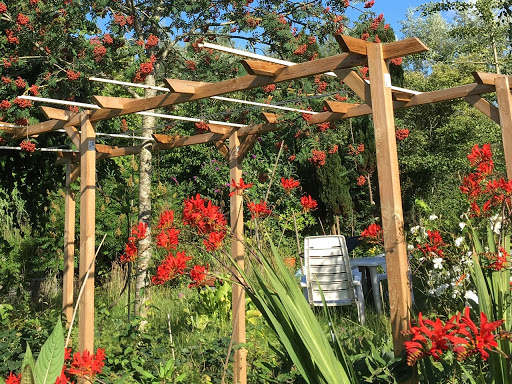 When I first came to Woerden I was very excited by the presence in town of an artisanal baker that used organic flour.

At a time when it's all too common to sell heated up frozen, partially pre-cooked industrial or semi-industrial dough, he is so 'real' that he doesn't have a proper shop, but sells from the workshop. He's not even open every day of the week, but does make delicious bread, so we have got all our bread from him for the last six months.

My excitement at finding an artisan, that you can actually see make the food, is shared by many. Considerably fewer, however, get excited at the thought of said local artisan using organic flour. Probably few have even noticed I said 'a baker that used organic flour' and not an 'organic baker'. And what is organic bread anyway?

As you go about buying food you have expectations: it must look good and be tasty. For most it has to be cheap, by which they mean affordable*. For some it must be nutritious and/or healthy. Especially if you have enough money to comfortably go by, you probably also want it to be good for the environment. And if you have ever had the time to consider the whole food chain, you likely want it good for the people that made it for you... but that is too much worrying for most.

Your expectations sadly clash with the economic and survival interests of ALL in the food chain (i.e. insects and other pests) and supply chain (farmers, intermediaries, shopkeepers). It has always been like that. I am told my butcher grandfather had to sneak in the least pretty slices of meat unnoticed, otherwise they would not sell, something that was not affordable.

So my artisan bakers meets my criteria of look and taste. He meets the criteria of local (good for the environment) and non-industrial (more nutritious and healthy). I can see all that with my eyes.
Bread has been known to be bulked out with chalk to make it cheaper: that I could not see with my eyes, but I take the price, and my personal relationship with the baker, as a proxy of quality, so I assume that he doesn't use chalk. I have no guarantee, but trust that.

Also, in this particular workshop I have seen the sacks of certified organic flour that I trust they use, after having checked. That definitely meets my expectation of food healthiness.

I do not really know anything of how the flour got there: I assume that it was grown in a lush field, milled in a postcard-pretty mill (this is the country of pretty mills, right?) by a lovely miller with his stone, and packed hygienically then shipped safely.
I assume the sacks contain what they say on the label, but I have no guarantee... or do I?

The only way to make sure you know what you get is to have legally binding definitions and standards.

Agricultural and food standards, issued by governments, require growers and producers to follow certain health and safety practices in the processes, and to avoid certain ingredients that are known to be poisonous or dangerous.


Every government tends to have their own different standards, except in the EU, where the 28 countries agreed on shared standards to be formalised as European regulation and directives and translated into national law. The EU food standards on what can go into food and food production have been notoriously stricter than, for example, the US standards. They have traditionally been based on what we call the precautionary principle: if a product or practice is not (reasonably) proven to be safe, than better be safe than sorry**.

We generally trust the standards chosen by our own government and upheld by our own people. In Italy people are very proud of their food tradition, in the UK people bang on about having the highest standard in all of Europe - yes, there is nothing to prevent a state in the EU to have better standards than the ones agreed by the 28 states, the law is only meant to set the minimum necessary!

Government standards, however, regulate only what is known to be poisonous or dangerous. Scientifically proven to be poisonous or dangerous***. But science evolves all the time, and what was fine yesterday is found to be dangerous today. There are enormous pressures from economic interests on food standards, as you can imagine, and spot-checks are not as frequent as one might wish, even if they do work, as proven by food 'scandals' ****.

But what happens with those substances or processes that are not yet scientifically proven to be poisonous or dangerous, but may well be found to be so in the future, and are suspected based on precedents?

The 'organic' certifications worldwide have tried to go further on government standards and address the issue of the use of chemicals in the fields, antibiotics in meat production and additives and processing aids in the food supply chain. That is on the basis of using the minimum external and chemical inputs in farming and food production, and that any new inputs need to be carefully tested before finding their way into the food chain.

The different certification bodies (possibly more than one per country or region and officially vetted by governments) have set their standards and they do keep a certain amount of control on the producers, including through spot checks.^ Therefore, organic producers follow tighter rules and have a double chance of checks: the government's and the certification authority's.

Not a perfect system, but better than nothing. Of course there are higher costs involved^^ and not all certifications are equally strict, it's again a matter of who you trust (the most).

As we are all human I am very conscious that farmers (even the organic ones) can and DO break the rules as their objective is to keep the crops alive and well so that they can sell them. So do the other players in the food chain, like processors. They might get caught of course, but they might well be fine.

Again, it's trust, and I trust two chances of controls better than one.

So, my expectation of the flour in those bags are that during its processing, fewer additives were used, and in the field, stricter standards (depending on the certification type) were applied on chemical use. Most essentially: no glyphosate.

In fact, nowadays, the great part of non-organic grains are dessicated before harvest with herbicide to make the harvesting process easier (especially in countries where the weather is not so sunny: dry stuff sticks to the machinery less than wet stuff). Most often this is glyphosate, a product that is absorbed by the plant (translocated action) and has a high chance of ending up in the flour.

I still have too little vocabulary to research in great detail the use of glyphosate in the Netherlands. but the rates of wheat spraying came out in the Volkskrant the other day: 1.7 kg pesticides per hectare (0.17 g per sqm) on average^^^.

I did go on a bit, didn't I? The fact is that in the last few weeks, in my lovely baker's workshop, some new bags of flour have started to appear. They are from the local mill, and they are not certified organic.

Provenance is a totally different issue.

We often assume that if we buy local flour it will be by local, small farmers that produce wholesome food. But the grains that are milled locally could well be imported, there is no rule about local flour being from local farmers! In fact, there is no rule to define what 'local' means^^^^, it is just left to our own interpretation.

Even if it the grains were from local farmers, there is no guarantee whatsoever that a local, small(ish) farmer does not use 'industrial' farming practices, including the use of pesticides. Provided that pesticides are present in the grains only within 'safe levels' the grains can go on the market and be made into flour.

Between the baker and myself

As my baker is not certified, the ingredients and the processes he uses are bound only by the government's food standards.

He chose to use organic flour but now he might well switch to the local mill's, which might even make the proudest of localists happier!

But, for me, that means I'll have to ask the question: am I still protected from glyphosate (and other pesticides) in the flour?

Having lived in Britain (too long) I don't like to make a fuss, and with my little mastery of Dutch it is really a pain to talk about complex topics. I'm rather hating this new development!


* 'cheap' is a tricky concept that I may one day talk about
** this is at risk of changing under heavy corporate pressure, and I may write more about it
*** even though they may rely on self-certification by for example the chemical companies themselves on the safety of their own products for a range of complex reasons
**** for example the UK 'horse meat scandal' when horse meat was found in processed food that was supposed to be containing beef or pork. And yes, 'scandals' are proof that rules are upheld, even though people tend to interpret them as failure of the standards
^ this is very similar to the 'fairtrade' certifications, which have made efforts to make the food supply chain fairer by setting stricter standards of fairness than those implemented by local governments, and set checks in place to verify that they are upheld. Fairtrade certifications however are voluntary schemes and not vetted by governments, as far as I'm aware
^^  it is more difficult to produce organically because you need non-standard technologies and possibly more manual labour to replace the use of chemicals. Furthermore you pay yourself to be certified, as it is deemed to be a competitive advantage, so the onus is on you
^^^ which might seem little, but it is chemicals we are talking about, also, chemicals are poisonous to different degrees and they do not always behave as expected: some hormone-disrupting chemicals are thought to be more dangerous in small quantities than in large ones (low-dose effects)
^^^^ this is of course a problem, one small aspect of which the EU countries together have addressed by regulating on the 'protected designation of origin'. The EU is also trying to encourage local supply chains, for example there is a market in my town with local producers that gets EU funding. I buy from the certified organic veg market stall, but they do import veg that are not available locally, even though I can trust them to choose their suppliers more carefully that, say, a supermarket

Posted by M.Paola Andreoni at 13:33 No comments: