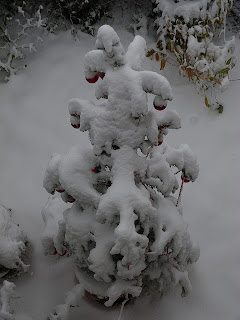 It will be next to impossible for me to do any gardening over the Christmas holidays, as there is still a fair amount of snow on the ground here.
However, this will be the perfect time for me to complete my seed stock taking: removing the seed box from the kitchen floor will also work as an excellent present for my husband! ;p

Until my next post, best wishes to every one: may your 2011 be healthy, prosperous, and... pest-free.

I'll leave you with a picture of my 5-Christmas old tree (which decorated itself, and rewarded me, with cones this year) at the peak of our snowfall!
Posted by M.Paola Andreoni at 23:01 No comments:

The other day I received an email from one of my favourite suppliers, Garden Organic, suggesting that I gave someone for Christmas an adopted vegetable from the Heritage Seed Library. While your money goes into funding the conservation of a heritage veggie variety, the recipient of the present receives an awareness raising card; in some cases, when the veg is not that rare, they also receive a packet of the adopted vegetable's seeds.
I was intrigued by the idea for a present to my auntie, who taught me my passion for gardening.
However, there were two issues:
So I decided I would make her a gift of the full Heritage Seed Library membership for one year instead. With the membership, you get up to six varieties of veg of your choice (depending on availability). I can help my auntie, who does not speak English, choose some vegetables she would like to try, and they will arrive by post anywhere in the EU.
I am sure my auntie will appreciate conservation of something with a heritage. And if she is really not keen on growing veggies herself, she can always give the seeds to her friends who do.
Posted by M.Paola Andreoni at 01:01 No comments:

... came back yesterday when I cooked Spaghetti aglio, olio e peperoncino with my own garlic and chilli, and tonight I'm having three roasted veg, two of which are my own: potatoes and Jerusalem artichokes. 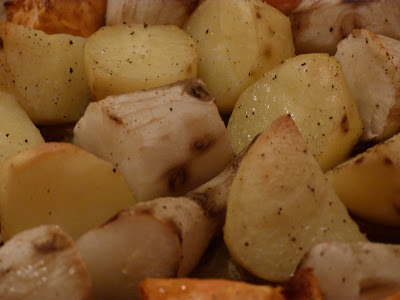 It feels good to cook with my own produce - so much so that I do not seem to feel the frustration of wilted, frostbitten and otherwise dead crops, the pests and crappy weather at the wrong time so much right now...
Posted by M.Paola Andreoni at 20:52 No comments:

I have uploaded a few pictures of the plot, the last of autumn...
Posted by M.Paola Andreoni at 23:45 No comments:

Reasons why I am not gardening

After posting about "winter blues", I have been thinking about why I am not so keen on gardening right now, and came up with a list of possible factors.
Well, it was good to talk them through, get them off my chest. As I re-read them, they might be that tinsely bit exaggeratedly pessimistic... better to be off and plant some garlic (even if not in a rotation) while the sun is out and to make most of the time, before the Uni essay is due for writing...
Posted by M.Paola Andreoni at 11:46 No comments:

Trying to shake my winter blues, I have spent most of the day in the garden doing the odd jobs I have left for so long, and at the allotment.

First activity: trim back the lavender... ohhh, looks so much better now: it is one of those very small and extremely rewarding jobs in the garden.

Then, in a desperate attempt to keep the neighbours' blooming cat from my garden, I tied the boundary net that had come loose: while I was at the hedge, I also implemented a long-thought plan... I hate holly in a small garden: it's so brutishly evenrgreen! So I have long thought of cutting back the two berry-less plants that have grown among our cherry plums hedge. Today I trimmed the holly back as much as I could, and planted around it four seedlings of Pyracantha, which I had been growing in a pot from my previous garden: I hope they will grow strong and push back the holly, providing berries for the blackbirds in my garden to boot.

How frustrating to attempt at ladybirds' lives unwittingly, while doing winter gardening. Today I have propelled four around, two of which ended up in the pond - which luckily I never clean so was full of leaves, a decent enough life buoy. I have been thinking, and hybernating insects are probably one of the reasons I do not like doing much gardening at this time of year; not the main reason, but one.

At the allotment, I planted the three blueberries and a bunch of strawberries that had arrived through the post this week. Then I had my first go at pruning the vines - with not-too-bad results, so I rewarded myself by unearthing a few Jerusalem artichoke to roast tomorrow with my gammon.

Overall a busy day, in rather bleak weather. Still did not get the kick out of it I usually do... :(
Posted by M.Paola Andreoni at 19:34 No comments:

Wondering at sweet peas resilience in the freeze...

... I have been working from home for a couple of days now, and, when going out to empty the bin, I noticed that my sweetpeas are still alive, despite the freeze. I thought they were supposed to die (after all in my experience they have died for much less before) but no, these ones I planted out late and they can obviously be hardy annuals (they are not the perennial Lathyrus of that I am sure)... will have to investigate more when I have some spare time... anyone knows? 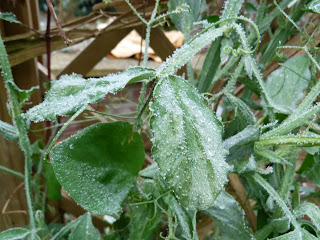 Posted by M.Paola Andreoni at 17:50 No comments:

For the first time in six years, since I first started gardening, I am not inclined to spend every single bit of spare time in the open air, either fiddling with some plant or other, or planning what to plant and where, or even just having a look around in the garden: I can spend a whole weekend at home without setting foot out of the door...

.. and even from home I am not very active: for example, I haven't taken my seed stock for the year, despite taking the seed box from the allotment a while ago - much to the annoyance of my husband, who occasionally trips on it, as it has been lying on the kitchen floor since.

So nothing outside, nothing inside, the only garden-related activity I haven't given up is reading my magazines in the bathroom. Otherwise, I'm pretty flat at the moment.

-- Post From My iPhone
Posted by M.Paola Andreoni at 10:43 No comments: