Redesigning the pond area and other planting

Back from the holidays, I arrived on a beautifully warm and sunny day, so I spent the afternoon at the allotment, clearing the area around the pond. 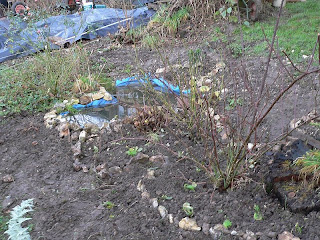 I weeded it all around (three wheelbarrow loads of weeds!), used the biggest of the innumerable flint stones on the plot to draw a nice border around the rose bushes, hostas and other plants already there, divided the clumps of Primula vulgaris that were congested, hidden under the canopy of weeds, and planted them nicely all over the border: I am very pleased!

In the next couple of months I will plant wild flowers all around: chamomile - which I love - and a couple of mixed seeds packets.

Today I had also received a plant of gooseberry and three strawberries, so I planted those as well: I will be very well off with soft fruit if all those I planted are going to carry fruits!

As the day seemed neverending (I stayed until 5 and it was still light!) I also managed to put a little bit more order in the shed...

Look forward to the weekend, now, to plant the onions (they are taking the first place the potatoes lost, I will end up having too many!!!)
Posted by M.Paola Andreoni at 21:59 No comments:

Happiness through the dirt!

Planting daffodils and remodelling the pond

Fantastic day, the best of the last few months: impossible to resist the call of the allotment; besides, a visit was necessary as it is the last day before some holidays (perfect time of the year if you need to leave your allotment as very little is growing and very slowly anyway).

All the way from home to the plot I was nervous and worried to find something amiss again: since my auntie was burglared when I was a kid, I have always dreaded trespass to my property as a violation of my personal space... anyway, the greenhouse was ok, so I relaxed and could concentrate on work!

As the ground was thawed completely, I could plant the daffodils around the pond.

There is something I need to say about the pond: last year when I made it I was very enthusiastic but very naive, so I made two mistakes:

so I found myself with an unnaturally bright blue pond sticking out some twenty centimetres on the upper end. However, as I had digged myself to exhaustion those days, I decided to leave it as it was, a decision I have regretted since.

Today, however, I felt energetic enough, so I started working around the edges and lowering them without even realising: although it was awkward to be bending on the knees all the time (I'm getting so very old!) I enjoyed the process like a kid: I was all muddy and a little bit wet, but the pond was sooo nice!

That's me with a rather silly face and dishevelled appearance, when I finally got home, pleading guilty with my husband, trying to avoid him getting upset for the amount of dirt I was carrying into the house on my clothes - again.

Posted by M.Paola Andreoni at 12:02 No comments:

PS - the end of potatoes

After the enjoyable day, a disappointing discovery

I thought I had too many potatoes for planting, but I am left with none.

The ones that were chitting in the shed have all rotted - I think they suffered from frost. Initially, I had thought that they might have got a little bit wet when I left them outside after delivery, but then I noticed that the potatoes in the kitchen, which I had washed a while ago and left in a bowl, are perfectly allright and chitting happily.

I am not sure yet whether I will buy more or just chit the ones from last year, after all it is unlikely I will eat all 40 kilos of them.
Posted by M.Paola Andreoni at 12:02 No comments:

Preparing for spring: let's look at the bright side...

I went to the allotment to plant my daffodils and the first thing I noticed was my fleece tent smashed down with a dead rat lying on it. Not a good start.
Then I got into the greenhouse and it had been trespassed on again: panel displaced, cigarette butts lying around and the *£$%?*%!!!$% ^&*&@@@@&$(s) had their bottom(s) on my potato bed: officially furious
------ I am in an awful temper: KEEP CLEAR of meee!!! --------
Anyway, to add to my frustration, the ground was an icy block, so only two bulbs made their way underground, and I was put off anything to do with soil.
On the verge of crying, I removed the dead rat from my fleece and took it to the tip. After the dispatch it felt somewhat easier to pull myself together, so I decided to tackle the dreaded shed cleanup. 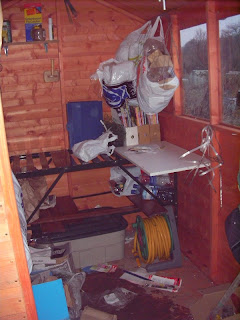 It was not particularly rewarding to start with: I had to build my second Gardman staging, which was left in its flatpack from last spring, with a reason - never buy a Gardman staging! It is called "heavy duty"; however, provided that you get past the nightmare of the self-tapping screws without hammering on your finger like I did, it will still need some propping as it is a bit wobbly.
Around 4 pm I managed to put it in the shed, added some more surface space through a shelf and, here you go! Not perfect, but the shed is almost in decent shape now, apart from the mud and some rubbish on the floor.
I found a crawling guest: a house spider, which cheered me up a bit (that says it all...). It still needs proper clearing up, but at least you can move around inside.
Am a bit worried for the seeds that I keep in there as it seems to get very wet inside: everything is covered in chilly condensation - will need to take care of it soon.
There is always something to do, around here!
Posted by M.Paola Andreoni at 18:57 No comments:

One last time during the holidays

I have been one last time to the allotment, in between frosts and before going back to work. Timing was really good as the weather seems to be getting colder and colder, although the days are finally growing in lenght again (we are now in that phase in which sunrise is a minute earlier every couple or so days in the morning and a minute + later every day in the evening).

The cropping is not too bad: I am still on a steady supply of leeks (although the big ones are running out) and I picked spinach beet and parsley. Still no sign of mushroom, but I decided to give it another go and planted some more spores. The salad sprouts look healthy, even though they are taking a long time to grow.

Although it stills is very much digging and weeding work (and slightly boring by now), somehow I seem to have reached the winter turning point and everything I do feels linked to spring and the growing season rather than to wilting and the winter gloom! 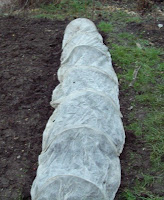 Having read a bit more about potatoes (as last year mine was very much a tentative approach to tubers cultivation), I worked out I needed to act straight away, so I have piled up a line of manure and covered it with fleece so that the soil won't be frozen when my earlies (Orla and Red Duke of York) chit, and I can plant them straight away.

Still need to finish clearing around the pond, but I have bought some daffodils on sale to plant when I do (hopefully next weekend). That way, I should have a spring flowering while waiting for the meadow and wildflowers seed mixes to grow. I bought compost for seed planting and fertilizers (both on sale), and some coldframes to start planting early on. And I sent in my request for organic seeds to the Heritage Seed Library.

Yesterday I also sketched a final draft of next year's beds layout and I am pretty happy. It seems that I have more potatoes and beans seeds than room to plant them in, so I will have to dig at least one more bed in my lawn at the top but then I should be fine. And I want a screen of sunflowers at the bottom of the plot (where the shared water pump is).

I am wondering whether I should order some more manure if that is possible... anyway, today I am feeling really excited about my gardening- maybe because the sun is coming out of the clouds again - look soooo forward to spring!
Posted by M.Paola Andreoni at 21:30 No comments: