I have started clearing the wilderness that both my plot and hubby's had become, the endless rainshowers having not so much made the soil muddy as workable again -especially the new bit, which was compacted and very much like concrete under the spade.

I will take sone pics over the weekend, as it is starting to look good again. And there is a lot going on, despite the indefatigable chomping of slugs and snails (I must be sowing at a rate of three times as much as I get).

At the moment, my favourite crop is redcurrant: the red berries look like jewels dangling from among the lush green leaves, and are delicious straight off the plant when properly ripe. But some ofthe salad colours are equally spectacular, the one I like most having light green leaves with curly edges in purply red.

- Posted using BlogPress from my iPhone

Posted by M.Paola Andreoni at 09:59 No comments:

This year I have lost my gooseberries to pigeons once again. It happened in the first year when I did not know what that bush was.

Then I netted it the second and third years, and had bumper crops.

This year, despite the netting, they were gone and I was left with only 2 punnets, when only last week I could see plump, almost ripe berries on all branches... which I did not have time to pick. Yes, I think it was a matter of timing. Once the berries were ripe, pigeons found ways to get at them - even though they are green and barely visible. They throw themselves on the netting, bend or break the branches, and eat all they can. The rotters.

Anyway, two punnets I got, and there might be some red berries on the newly planted bushes, the ones I hope will start cropping seriously from next year, their third.

You really have to like gooseberries, because picking them is not for the faint-hearted. Today my arms look like I had a fight with a rather aggressive cat. It did not help that to avoid a thorn, I ended up with my hand in a clump of nettles! The British seem to like them better cooked, in crumbles, fools etc. I like them raw (and so do all my Italian friends that have heard of them). When they get soft, and from clear go cloudy, having lost the worst of their acidic edge, gooseberries have a mild yet delicious aftertaste that is difficult to describe.

I have some with me for lunch today!

Posted by M.Paola Andreoni at 08:38 No comments:

They say you have to try everything at least once in life...

... so this morning, when I found myself awake in bed at 5 AM, thinking of the plumber and work, I decided I would get up for a change and go to the allotment to relax. And so I did.

Rather strange for someone who, like myself, is definitely not a morning person, I thought the sunshine out of the window warranted a go at sunrise gardening.

The three hours I spent weeding before breakfast were very productive (true in Italy there's a saying that goes "Morning comes with gold in its mouth"), and I got home with a good crop to boot! 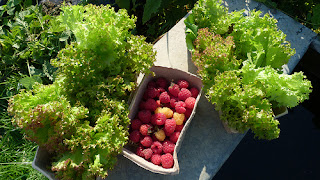 Still picking the come-again salad, while the second sowing slowly grows. Salad is really a worthwhile crop, has saved me good money this year, so I took advantage of the current Thompson & Morgan 3 for 2 offer on salad seeds, and also bought some corn salad from Seeds Of Italy, which should crop late in the year.

Now though - slight drawback - it will have to be bedtime already.

Posted by M.Paola Andreoni at 21:23 No comments: