The allotment is a disaster, and it doesn't help seeing it after a shower when the fattest slugs I have ever seen are all happily out and about.

However, there was a single purple aubergine flower whose assertive beauty is such I cannot describe: I wish I had a camera with me, as I doubt the mobile phone's rendition will do it any justice. 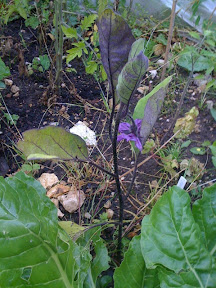 No news from the allotment as I have not been for a while; however - in what must have been a moment of genius in the dull haze of the brain I am living in at the moment - I decided that... if the mountain doesn't come to Mohammad, then... I would grow vegetables at home!

The idea came when I received my T&M cabbage plants and no way I would have made it to plant them at the allotment, so I rescued some leftover pots and compost and put them on the patio. 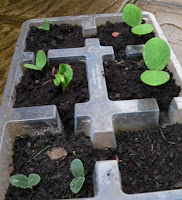 Then I thought: there may still be time to grow some leeks and pumpkins, if the weather keeps into October. So I sowed leeks in fruit punnets on the barbecue, and pumpkin seeds in a seed rack I had taken home from the allotment.

The weather has been fantastic of late, and the seedlings are all out now! We'll see if they make it in the next few weeks...

... Should be back at the allotment for good in a couple of weeks!

-- Post From My iPhone
Posted by M.Paola Andreoni at 12:33 No comments:

The ire of the (Anglo-)Italian

Some of you may remember the vicissitudes with ducks when I was still regularly visiting the allotment a few weeks ago. When I ended up fencing and covering in net my little pond supposedly to avoid damage to my neighbours' tasty (for the ducks that is) seedlings. With the result that no frogs have probably taken residence there (unlike at home where I now have 3).

I may also have mentioned the b****y buckets that someone had placed on the path in front of my allotment and the water tank. The ones that were in the way most of the time. And that - filled with stagnant water - were very likely to breed stinging insects of the mosquito family. The same buckets that have been smashed by vandals and nobody is throwing away, so I will have to do it next time I leave the allotment empty-handed.

Well, an email exchange with the allotment manager revealed that the above-mentioned buckets were placed conveniently in the way - obviously by some well-meaning naturalist - when the ducks were there. In fact I cannot but derive that they were FOR the ducks, rather than against them (unless anyone knows that buckets of water scare ducks away).

I was fuming for a handful of minutes. What was the point of complaining (albeit indirectly) about my pond's luring attraction to ducks and then having b****y buckets in the way!

Well, auntie always says that every head makes a little world of its own. And I am probably too eager to please, from my outsider's, immigrant position.

However, being now thoroughly Anglicized, or just too busy with my uni project, I calmed down pretty quickly and forgot about it.

Except now I've learnt, and will know better what to do with my pond next year! :)

-- Post From My iPhone
Posted by M.Paola Andreoni at 21:28 No comments: 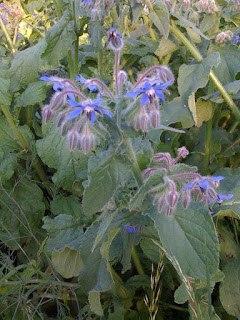 It said on the packet that it was an annual, but it turns out it might end up a weed.

Some say its beautiful flowers are among the few blue comestibles in nature.

Borage oil is supposed to be good for PMS, skin diseases and a wealth of other ailments, as it is an excellent sources of gamma-linolenic acid (GLA).

Leaves (although they contain a mildly toxic source) can be used in salads and soups, flowers also decorate salads (or Pimm's), and the plant in proximity of tomatoes improves their taste (but I have planted it in the asparagus bed, one of the few that were empty at the time...)

It is also called starflower, and it's growing beautifully... I do hope it's attracting insects (and not spoiling the asparagus) as I myself am not enjoying it at all, given that I barely had time to take this picture! It's one of the first things I will have to sort out once I'm back.
Posted by M.Paola Andreoni at 23:11 No comments:

Pick of the day 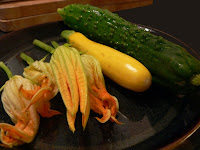 After full 4 days, I got to water the tomatoes just in time before they keeled over. Looking at the bright side, I picked my fist cucumber ever, and my first courgette of the year.
But that's all folks: it was just another blitz visit!
Posted by M.Paola Andreoni at 21:24 No comments:

20 months' worth of work gone wild

Another blitz to water the tomatoes in the greenhouse has confirmed much depression, as weeds have won back all the ground they had lost through my painstaking work over the months.

I had to pick onions that were rotting because of the endless rain (must be a good 40 days now with little respite) and pull some mint and fennel (herb - spectacular bronze leaves and delicate flavour of aniseed, excellent with white meat fish, just dry and drop in the sizzling oil in the pan when needed) which were invading the path. 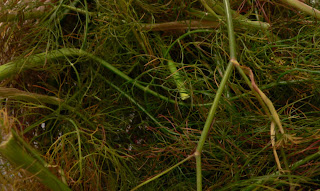 Tomatoes look fine though, and so does celery (and the weird garlic plant, but still have no pics). But my beautiful pumpkin plantlets have disappeared altogether...

Just over two weeks to my final uni project, then I will be back to my hobby, hopefully...
Posted by M.Paola Andreoni at 11:19 No comments: