Yesterday I had to spend all my time at the plot re-building the greenhouse that had been wrecked open arguably by the strong winds over the week - sunset was beautifully red, but did not manage to pick me up after the event: I should be buying new greenhouse panels - they did not last that long and at the moment I cannot afford them.

And just to end the weekend on a high note, when I went to try and get some mushroom spawn on manure in the propped-up greenhouse today, I got so wet, bucketfuls of rain...

Anyway, it should hold up for a while, and I got my spawn scattered. Instructions said you need a bed of at least 25cm with strawed manure, under wet newspaper. You should take all the creatures that can eat the spawn, including worms, but that seemed a bit of an overkill, and impossible to achieve anyway: my greenhouse is no sterile environment!When the newspaper gets covered in white filaments, it's time to layer on some compost and chalk... getting chalk definitely no probs this side of the world, but the procedure seems quite elaborate - this time I will tring doing it by the book. I really hope they do grow, as the handful I managed to eat last spring were really delicious, tasty in a buttery sort of way.
Posted by M.Paola Andreoni at 22:32 No comments:

The ups and downs of trying to be kosher

After an afternoon at the allotment digging weeds out of the soft fruits bed, I came home and threw myself in the bath with my autumn copy of Garden Organic magazine. Someone had written a letter asking about non-organic manure. 6 months composting may well make it acceptable for use in organic gardening; however, it must be GM-free manure to start with.

Of course, if the animal had been fed with GM feed, the fibres and discarded material even through the guts of the animal may still have GM DNA in it. I had not thought of that. Yet GM-free is on top of my agenda. And I know that animal feed can be GM in Europe. Still, somehow I had not associated horses fed without the use of chemicals in the supply chain with the possibility of GM in the feed.

Big depression followed. I had already felt a bit defeated the other day reading some very interesting info on the website of the Scientists for Global Responsibility. It's everywhere: it's very difficult to keep track of all the right things to do, to source things that are ethical, sustainable, organic, especially when it's not the mainstream ones. I have a lot of time for those that are consistently inquisitive, attentive and selective. But I can also see why the average Joe Bloggs does not care. It's so complicated.

And there are so many powerful interestes pushing for GM, lobbying and sneaking it in as widely as possible, that one wonders whether we stand any chance. So little concern for the possible unintended and unexpected consequences of introducing something in the environment that by its own nature is bound to spread and cannot be controlled. I was really struck, studying my horticulture books, by how often they would point out we do not know exactly how a plants carries out its functions, have I mentioned that already? And consequently by how arrogant it is of man to want to change plants when one does not even quite understand how they work: the product of million years of evolution...

... anyway, it's quite interesting that the Economist debate, which was making the case for biotech and sustainable agriculture being complementary, started out with 79% in favour and is now down to 38%. Avaaz petition on banning GM in Europe has exceeded the minimum 1 million signatures. There's a lot of people on the anti-GM side, will it matter anyway? Does GM matter? It's only one of the irresponsible things we are doing to the environment...

My brother told me something I found very wise. He believes that Earth will bounce back from anything we throw at her, and regain a balance. The only ones that might lose out of our Earth's regaining a balance are the human race, as the new balance might not be suitable for human life: we are not needed for the Earth's survival. That's because it's not OUR Earth. Puts things in perspective, raises a lot of questions.
Posted by M.Paola Andreoni at 22:19 1 comment:

When I came back from my travelling the allotment looked decidedly autumnal: the most tender plants such as nasturtiun, the vine, my precious chillies and the beans had suffered from frost-bite and looked miserable and rotting. And I could not find my stunted green pumpkins in the grass.

Time to clean up, that's what I did, making sure there was enough weeds and general mess to accomodate overwintering insects. I covered the artichokes - as they are just half hardy and barely made it through the freezing spell - the herbs and the salad seedlings.

Planted garlic, shallots and some onions - but I had to break the four year rotation. I hope we get some more land this winter: we put ourselves at the bottom of the waiting list on suggestion from the previous allotment manager in May. The hype for allotments seem to have passed already, and there is more turnover as a consequence.

Who knows, the allotment management processes are rather opaque... for example turns out that allotment managers are elected annually by the tenants... 3 have changed in the last three years and I never had any opportunity - request or notice - to vote anyone. And when I put myself forward as a deputy - as I got the impression there was noone - the manager never got back to me with a final answer, then I found out by chance someone else had been appointed. Not exactly how I had expected the UK system would work when I came over: in my naivete I thought it was all about fairness! In this case at least, not much difference from Italy instead. 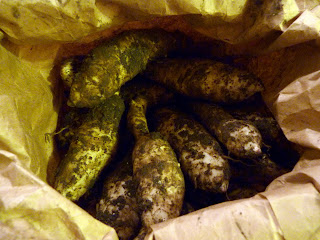 Anyway - jerusalem artichokes are in season on my plot and I am on my way home to cook some for dinner. May post a pic - by the way, you may have noticed I am not writing much, and you are right: cannot bear any longer to look at a computer screen out of office hours...

-- Post From My iPhone
Posted by M.Paola Andreoni at 17:53 No comments: