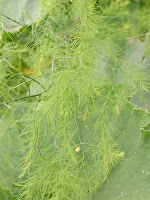 I was all set on pulling the female asparagus plants today: my plan was to create a separate bed only for them. However, when I got there no sign of either berries or yellow flowers (that yellowy thing in the picture should be one). Now I am not sure which plants I have to pull, so I suspect I'll leave it for this year. It must have been birds, as slugs would leave traces on the plants as well, but there was none.

Talking of slugs, they are really the major pest in my allotment and I will have to come up with some serious plan for next year - the cime have all gone, most of the new round of turnip's seedlings disappeared, the salad patch is a wasteland and several of my potatoes have been tunnelled into by as many as 10 slimy creatures together.
Today I have bought collars woven with copper fibres and I think I will have to resort to nematodes as beer traps have not worked: more ground beetles than slugs drowned, which is no good as ground beetles feed on slugs and knocking them off is not a good move.

I have planted Marsh Marigold and Purple Loosestrife in and around the pond respectively, and had a go at creating a toad cavern with flint and a spare tile I found abandoned around, let's see if it stands the weather this winter. As soon as the pond gets clear again of the mud I have stirred today I will create an island for the frogs to sunbathe on, by placing bricks on the bottom of the pond and a concrete slab on top, as suggested by VeggieGlobal.

The pumpkins are growing quickly and so are the French beans. The transplanted Florence fennel is putting out new feathery fronds, which I decide to interpret as a good sign, hoping that the bulb will follow after the leaves. I managed to pick one ripe tomato Tigerella from the greenhouse, while a handful I had to throw because they were diseased. Finger crossed for the rest.

And the only surviving chili plant has one single flower on. I am wondering whether I should cover it now before it gets too cold. After all the hassle to grow chilies, I hope this "Hot Mexican" is a perennial species, I may still find the seed packet and be able to check.
Posted by M.Paola Andreoni at 01:13