I have been to the plot a couple of evenings this week, and befriended a fox.

A sign of my loneliness, or possibly to exorcise my fear of him scaring the living daylights out of me by jumping out of nowhere, I started talking to Mr Tod when he turns up just before sunset. Running away or ignoring me were his first responses. 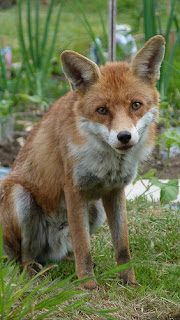 Yesterday, though, he was a bit more sociable, and even posed for me, at a safe distance (bigger pictures on Flickr).
I think we like him, as we have a hope he might chase rats away.
Besides the fox, wildlife is thriving, I even spotted a striped bumblebee I had never seen before!
Although I spend a comparative little time on the plot, the experience of the last few years seem to have resulted in more going happening: I have veg at all stages of development: from the brassicas who have just germinated, through the broccoli white eye that I potted on last week, the courgettes I planted out yesterday and the tomatoes and aubergines that, outside and in the tent respectively, are growing on, to my successionally growing salad.

Fruit also provides a varied landscape: from the wines that are prolifically flowering, through the strawberries that are overwhelmingly being prey to birds despite the cover, to the almost ready gooseberries and the raspberries, whose first few we enjoyed this week.
Posted by M.Paola Andreoni at 16:10