This week I have been travelling to Switzerland and I must say my allotment holder soul was struck by a view from the train just outside Zuerich. Not considering the numerous chicken pens which made me think of the mountain village I used to spend my holidays and - more recently - weekends in in Italy (which I am sort of missing), I was surprised to see an allotment site over which, flapping in the wind, were flags from several countries. What a curious idea - I was thinking - when the train went past another one exactly the same. Obviously it is a tradition, and it felt good to see different nationalities so openly celebrated together in the close community of the allotments.

Anyway, back to England, this weekend I finally managed a visit to my allotment after more than two weeks.

To start with, everything looked horrible and I felt so disheartened. The snow had damaged the Borlotti beans and the sweetcorn, and most plants were either dead or dying, with the exception of the green manure Phacelia which is doing pretty well. It is really annoying to find out that the only thing than one would hope to be exterminated by snow - slugs - have instead survived pretty well, indeed so well that it would not be inappropriate to think of the plot as Slug Central. 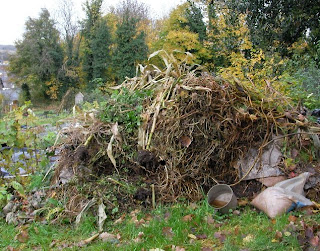 Although the weather was not particularly exciting, it did not rain, and I managed to clear everything up and dig the half bed that I will need to plant the garlic as soon as the ground is not waterlogged, hopefully next weekend.

I guess I cannot complain. I have picked four pumpkins in the end, three of which should be ripe according to the rule that a pumpkin is ripe if it resists puncturing by fingernail.
Also, I got 15 corn cobs, which are eatable albeit a bit starchy from staying so long on the plant. And 300gr of Borlotti beans - very little considering how many pods were on the plants before the freeze, but it is better than nothing, isn't it? I will try them tomorrow.

Despite the overnight rain I managed to go again this afternoon, when it felt much better compared with yesterday, probably because it looked cleaner. As it started drizzling, I decided to clear up the greenhouse so that I can plant something inside: salad and mushrooms for example. It was a proficuous time: I managed to make everything neat and tidy, which was needed as there were signs of mice. Finding some chitted potatoes in a paper bag, which I must have brought over some time ago, I planted them inside, just to see what happens. It is not the wisest of ideas, as I had to plant them in compost that had previously hosted my blighted tomatoes, but I decided to give it a try anyway. I also planted some tulip bulbs and erected a trellis to protect and train my fig tree on.

In terms of socialising, it was good to meet the angel neighbour who felled the obnoxious tree at the top of the plot. While we were on the topic, and since he did not need his logs and wanted to burn them, I asked if I could have some myself.
I will use them to start building my little "nature reserve" housing block. I have seen a great picture of one in "The Organic Way", the magazine that comes with the Garden Organic subscription. It consists of 6 pallets in a pile, filled in between with logs, hollow pipes, bricks, straw and rolled cloth: I want one!
Posted by M.Paola Andreoni at 21:34