Duly planted the mushrooms beneath the glasshouse bench, working the granules in the manure and covering with damp newspaper. In ten day or so the spawn should start to form.
The broad beans have also found their way into their winter bed and I have tidied up the asparagus patch, whose containing wall had bent to 45 degrees with weight (much less difficult than expected!).

Weeds were cleared out of my "fancy" patch in front of the greenhouse door, where I planted lavender and bulbs around an existing gooseberry bush. While clearing, I was pleasantly surprised to find 3 oregano plants, which I cannot quite explain (Is oregano a UK wild plant? I doubt it... Did my predecessor scatter any seeds? Maybe... Did my plants - which are in a totally different place - spread seeds that far? Mhhhh) . Anyway, I transplanted one in the greenhouse and mulched around the other two: let's see if they live through the winter!

Found some onion sets left from last year: most had wilted but some seem fine, so I will have a go at them next week. I also bought more raspberries and strawberries (last years' 15 plants, the runners I have transplanted and the new plants should ensure enough supply for next year!). 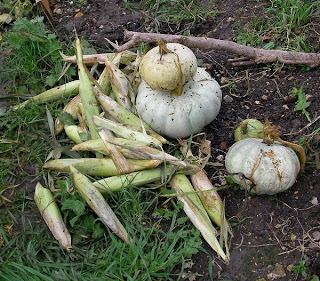 Tonight I need to cook pumpkin, as the three I got from the allotment are starting to go off around the slugs' holes. I have found two recipes.

This pie should take me through the week at lunchtime.
The other recipe, my auntie from Italy dictated on the phone (not sure where she found it, possibly the Silver Spoon).

Steam or boil the pumpkin and potatoes and then mix with the rest. Cook for 20 minutes until golden (does not specify temperature, auntie's guess is 175C).
Posted by M.Paola Andreoni at 15:11