So hot I was alone

It was really hot tonight, and I was alone, which meant that the water pressure was ok, and watering was not such a stressful job.

Really enjoyable after a full four days without gardening... I transplanted more tomatoes, some soya bean plants, weeded here and there, added a couple more humming lines, which seem to be working very well to protect the soft fruit and finally got to pick the first, huge gooseberries: I'm going to make gooseberry fool with them! 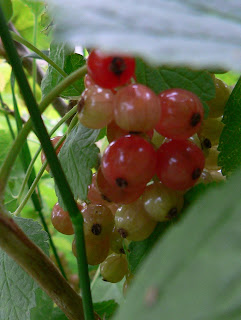 In the meantime, the red currant is almost ripe, and looks pretty stunning - I must say that many soft fruits that are pretty common here are unusual in Italy so there is much to learn on how to eat them as well as how to grow them.

Everything is growing reasonably well, all considered: the sweet pea I transplanted ages ago is finally flowering, courgettes are on their way and the sweetcorn is also slowly catching up. Celery is 20cm and strawberries are still cropping, although I have noticed that they do not taste as good when they are all red and ripe, as when they are a bit behind. Also, there are two figs as big as tennis table balls, and more seem to be coming out, which is really exciting!

Leek's flowers are in full bloom, and they seem to attract bumblebees, so in the end I am happy I left them there - and I can plant brassicas in between them anyway. In fact, I sowed kohl rabi, which I hope will come out, as I have tried some from Riverford's vegbox in a glorious roast with my first potatoes, and it's an interesting tasting turnip.