I'm back, with ignorance and squeamishness 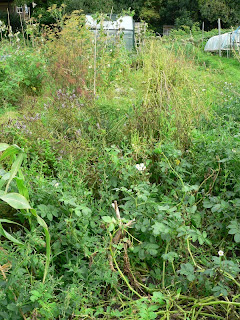 Back, I am! - Today, halfway through writing my last uni essay, I decided I had enough and wanted to go to the allotment, which I did, for three hours. This is how it looked when I arrived, and a lot of excitement in store!

It took me a while to get my head round where to start, especially as one of my gloves was gone: vandals have been coming in I know - but what's the point of stealing one spare glove?

Anyway, after loading the rat trap (I saw something moving behind the shed), I mucked about my compost-heap-to-be, wondering whether to burn the dry remains of all the vegetable matter I left uncovered, and decided there were too many spiders and ladybirds in it, that was not worth disturbing.

Then I moved on to the potatoes, as this is manure time, and you need space at the bottom of the allotment for the truck to unload it: potatoes were in the way so I decided to clear the bed.

With a determination to do it properly, despite my ungloved hand, I started pulling and digging: you have to be very careful as even the tiniest bit left in the soil will grow into a new plant - I am told that during the war they used to plant potato peel only. So I filled four different bags:

I must say I was feeling uneasy - not only because the vandals might come back and I was alone on the grounds, but also for a general feeling of squeamishness.

To set the scene for what happened next, I have to tell you that a few days ago we had the roof man for a quote, and he mentioned that the lead used on roofs makes them unsuitable for water collection for vegetable watering, as there is a risk of poisoning. That set me thinking about all the risks & unhealthiness possibly hidden in the ground - an irrational fear, but still too fresh in my mind.

As I went on weeding behind the potato bed, while pulling some bindweed, I heard squeaking coming from underneath. What would you do if you heard squeaking from a hidden place in the middle of your vegetables? I panicked.

The squeaking continued and I was just thinking rats rats: the ones that ate my potatoes and might find very convenient to have a nest near them. In a one-gloved frenzy I uncovered a litter of five... 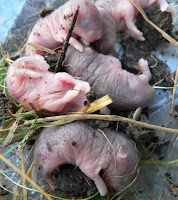 Shaken, afraid of mother bites and even more of rats proliferation, I picked the five little creatures and threw them away. Not a good feeling throwing away live things - especially as they look kind of cute even though they might be pests. But I really did not know what to: surely the mother would not want them after my picking them up; for a split second I though I might feed them and see what they came out to be exactly - mice or rats. Very soon afterwards I started thinking they might have been hedgehogs or other useful creatures, so I panicked even more.

I am stil a bit upset now, even after some research at home confirmed they must have been either mice or rats; actually very small: one to three days old, with grey hair coming out - hedgehogs would have bristles already.

Mice they may be but there's people keeping them as pets... what should I do next time that anything like this happens? What should I know? How do I identify creatures? What are the risks they might pose and any benefits?

My ignorance and squeamishness makes me realise that - despite my recent reprogramming as a nature-loving allotment holder who likes to muck around - I grew up in an environment where all sorts of creatures were considered a threat: insects as well as rodents (let alone bacteria...). I grew up in the 70's when DDT was sprayed on almost anything alive. I grew up in a society that considered working the land a backward thing, something modern people had left behind. And apparently my family back in Italy was not alone with a tendency to hypochondria...

However, even with all the excitement and moral reasoning, the plot looked much improved after I left, just before dusk - my hands trembling a little as I picked a couple of courgettes and some raspberries - I'm back! 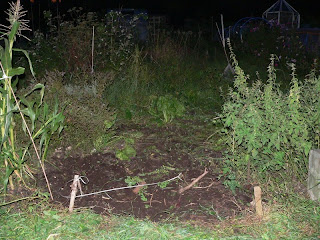