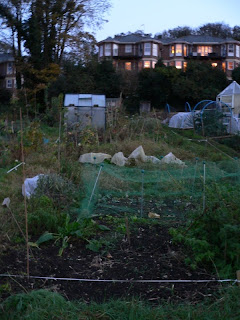 I have no pumpkin to show you for Halloween. Just some more or less ripe tomatoes, a handful of raspberries and a good amount of spinach beet. And a pretty un-spooky picture of the plot at sunset.

Moreover, I am afraid I am not in too good a mood to write either: stressful times with the builders at home, and I had to spend my week nights writing recorded letters in reply to their bullying.

After studying the flower *yes, I mean the flower stamen pistils and all* in the library this morning while it rained, I went to the allotment this afternoon as soon as the sun came out, all eager and hopeful for a relaxing time.

My first sight as I passed through the allotment's gate was a child running around my plot and suddenly disappearing. You have to know that my allotment is sunk, the path being some twenty centimetres above it. That was not a good omen. When I came close, the reason for the disappearance was clear: my blooming neighbour, whose party the child belonged to, had as usual left all his blooming stuff in the path and the blooming kid had fallen in my plot, leaving a nice footprint in my leeks' bed. Not only that, but his blooming mother took my plot for the blooming path and just felt free to use it to walk in.

You might have understood I WAS FURIOUS - but a select few may also appreciate my sense of humour. So furious was I, that I thought the time was come finally to tell Keith it was unbelievably annoying that he treated my allotment as his service area. He had the cheek to rebut that he did not know I was coming and mutter he has to pick his crops (what that implies in terms of how he moves around when I am not there I cannot quite bear to think)... I was too angry to utter anything sensible so I kept quiet. I should have told him that he was supposed to use the space on his plot to move around, leaving some walking and working space around the beds. I should have said that if I had walked on his blooming beds he would not be blooming happy, would he?

We were talking just last week with Nikki and Tom about people who take a lot of liberties, even as crop-damaging as walking dogs on seed-beds, with other allotment holder's plots.

Anyway, I just gave up sowing my broadbeans (which was the plan for today), and demarcated the boundary with a line instead. I will have to buy a thick and colourful rope as some other people did (wonder why ;-p). There is a naval shop near my office, come to think of it.

After that, my sowing mood had gone, so I cleaned the shed from top to bottom. It was relaxing in a way, I had a good time after all, and I made sure there were no rats in the shed, which was \ fear.

But I could have done without that just today. Maybe the weather will keep tomorrow... tomorrow is another day.
Posted by M.Paola Andreoni at 17:18