Weather is glorious, but no rain means a lot of watering needed, and seedlings wilting away.

I had to make some rhubarb jam, as the plants have decided to grow this year, and very fast... incidentally they are bolting with all this heat, and it's impossible to stop, so after chopping three buds, I've given up. 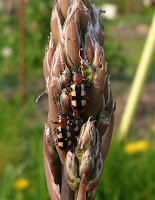 Asparagus, also, has started to make good spears four years from planting: unfortunately, asparagus beetles (Crioceris asparagi) have noticed too! Here they are chomping away... I must say that the spears that have grown through a patch of self-seeded parsley were left alone, though: maybe companion planting is the answer. In the meantime, I have killed the offending pretty little nasties. 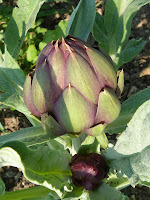 My first ever artichoke has also appeared on last year's plant - actually two of them - they are a great temptation, but I will follow Mark Diacono's advice in his book "Veg patch": I will be brave and chop them off so the plant will concentrate on the root system instead :(

The plot looks lush: even my neighbour Keith noticed it's looking at its best ever.

The home pond is also joy: frogs, tadpoles and newly emerged damselflies have been joined by newts! I do not have a good picture, and I have not had time to check which species it is, but here's a blurry snap. All the creatures I had created my ponds for have now moved in: I'm happy!

But I am officially behind schedule once again, with my uni exam fast approaching, and the drought is not making it any easier to manage... that is one of the reasons I have not been writing much; however, you can follow the unfolding of spring in my gardens on the photo album.
Posted by M.Paola Andreoni at 03:46