I must have written before that I have a collector streak in me, and it comes out with seeds.

Every winter I get all the packets out from the recesses of my shed and take stock: I usually end up with some 150-300 species on my database (they have grown over the years both with perennials - which I also catalouge - and new seeds). Then I sort them by month of sowing, put them in coffee tins and padded envelopes with some silica gel to keep them dry, and they go back to the shed, to be picked out at the right month...

... which sounds quite orderly, but it isn't really, as I tend to run late after April every year (for some curious reason) so previous months' tins lie about for a while, and then of course seeds can be sown over a range of months and I buy new ones on top (as I need them or it catches my fancy)... basically, by this time of the year I have lost track of what I have used and what I still have! That is why the winter stock taking is so necessary for me.

As my garden and allotments are getting to capacity, after four and five years of working on them respectively, last winter for the first time I realised I had simply too many seeds to use, so I started looking for someone interested to share, and I found it surprisingly difficult! It was only in spring that someone showed interest. I then mailed my seeds, which they might or might not have received. Never heard from them again. That I found sad, as I care for my seeds.

Then Carl came up with the idea of "seedy penpals", like the penpals of yore, sending letters to each other, swapping surplus seeds, and keeping in touch on gardening progress. It is a great idea as you get to try new seeds, share your surplus and know what happens to it, and get to know someone at the same time: I enrolled straight away. The first seeds swap ever under the scheme was scheduled for early August, and it has now gone through, so I have now virtually met Rebecca and Lucy, and we swapped seeds.

Rebecca is my receiver pal. We had a lovely exchange of emails and, based on her preferences, I selected some seeds to send her. Always a difficult task for a seed hoarder like me :D , but I enjoyed trying to match species to Rebecca's asks and writing to her about them. I thought some seedlings would also fill up for the fact that we are at the end of the season and you cannot sow so many things now as you would in spring. I hope she enjoys my little parcel.

Today I also received my own parcel from Lucy. Collector's paradise here, it will increase my collection rather than keep it in check! Lucy warned me she was quite busy at the moment, but despite that she managed to send me a rather wonderful parcel with a selection of flowers (for my new wildflower/cottage front garden, which I told her about) and veggies. The most interesting thing for me is she seems to have collected some of the seeds either from her own garden or other places, which I admire: I do not trust myself at saving seeds and have only occasionally attempted it- it's something I've always wanted to take up, though, so here's someone that I can learn from! 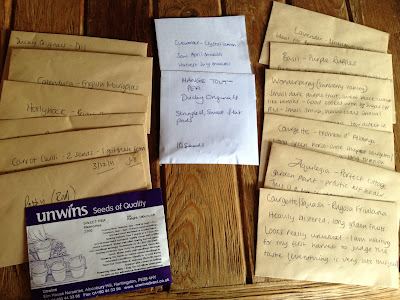 I'd better stop sitting in front of this screen, writing, and get going: a lot of sowing to be done!

Then, this winter, when I take stock of seeds again, I will have my seedy penpals in mind and the next swap in March to look forward too. :D
Posted by M.Paola Andreoni at 11:50

Hiya - I am also in the scheme and have really enjoyed the process so far. My sender Solly was so quick that by the end of the first week the seeds were here and already growing. I am hoping to plant them out in the next couple of weeks. Would really recommend joining up to anyone considering it.

Hello There,
I have ben so hapy with the Seedy penpals, and I loved hearing that I am not alone in my seed squirrelling tendencies.
This is a great post, do you mind if Carl and I add it to our link up about Seedy Penpals?
Thanks
Mel