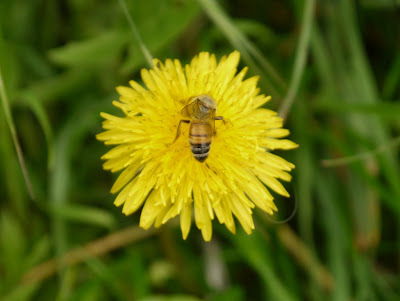 Taraxacum officinale are beautiful wild flowers, laden in pollen (I remember a spring in the mountains when everything was covered in yellow "dust" as dandelions all came into flower) and last year, after reading about someone having the largest botanic collection of them, I started noticing the different leaf shapes... I even considered devoting them a special patch on the plot. But for some reason I did not think of picking them for food.

Dandelions are 100% edible: flowers, leaves and roots. According to PFAF:

The other day I was picking my chicory catalogna, and next to it was a dandelion head, lush as I had never seen one.

The differences between the two leaves were small (in fact in Italy we call dandelion "false chicory": cicoria matta), they can be used in the same way. And they are for free.

I though it would be silly not to pick them. Blanched them, and they were nice, not even the husband complained.

So I picked a bag full of dandelion the next time I was on the plot.

And here is where my bread post from last night comes in. I decided to make a pie with the dandelion, using some bread dough I had ready.

The dough was made with 150 g wholemeal rice to 525 g plain white flour: I used 2/3 to make pizza for dinner, and the remaining 1/3 I decided to fill with the dandelion (perfect as packed lunch).

First of all, I added a tablespoon of extra virgin olive oil to the dough and let it rise a bit longer, while I prepared the greens (inspired by this Italian catalogna recipe).

I blanched the dandelion, then light-fried some onion in extra virgin olive oil, with capers, olives and anchovies (those preserved in olive oil), and threw it in, giving a good stir until the flavours had soaked through.

Two thirds of the dough I used as a base, in a cake tin, greased with some oil. The remaining third of the dough, rolled with a pin, made up the pie top. 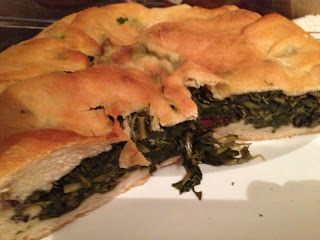 The greens have a slightly bitter aftertaste that complements well the slightly sweet wheat and rice focaccia dough.
Posted by M.Paola Andreoni at 22:17