Finding the right recipe for your produce

It is very important to find the right recipes for your produce, the ones that bring out the best of its qualities - if you want to enjoy it. I am pretty sure that everything edible can be enjoyed if prepared in the right way.

Just a few minutes ago I was talking to someone that had tried eating dandelion raw; unsurprisingly, he had not enjoyed it: dandelion can be rather bitter and an acquired taste, but if you cook it in the right recipe... A few weeks back, an English friend told me that she had enjoyed cauliflower for the first time, raw or quickly blanched, and it did not compare at all to the mushy stuff she used to eat - and hate - as a kid. 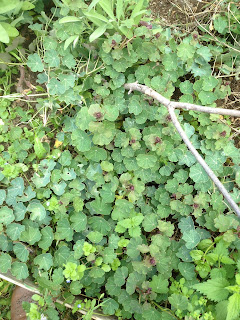 This discussion also came out on Twitter over the winter, with regards to mashua (Tropaeolum tuberosum). Much like marmite, mashua seems to split people into lovers and haters (proven by @rhizowen survey!). Mashua has a funny taste, and is very aromatic: the impression I got when tasting it for the first and only time was eating potatoes while smelling violets... and that is weird. But I am sure there is a recipe that does mashua justice, and therefore I have grown a few plants this year, to have a proper go at findingit. @carllegge is a master of that art, and he has inspired me no end.

But this post, which I have been mulling over for a while, is about tree spinach. Another "unusual" plant that I grew for the first time two years ago as part of Garden Organic members experiments. It is a pretty weed, Chenopodium giganteum, prolific self-seeder with green leaves tinged with purple dust. However, I was not over excited about it at the time of the experiments: the texture is downy and tougher than ordinary spinach, definitely less moist. Not a success as a replacement for blanched spinach. 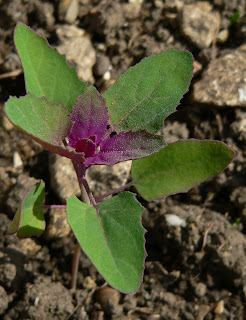 This year, thought, two years on, tree spinach made a voluntary comeback in my plot. And I was desperate for self-seeders that might give me good crops without too much work. So I decided not to pull it out and have another go.

And guess what? I found the perfect recipe, a recipe in which it replaces spinach but that is more suitable to its texture: curry.

Referring back to my Indian food guru, Anjum Anand, I found a recipe for spinach pilaff in her book Indian Food Made Easy.
Here is my adaptation of that recipe.


Cook the Basmati: I learnt from @pukkapaki. Rinse away the starch until the water is clear. Pour into a crock pot, cover (just) with cold water, add a squeeze of lemon and a tsp of salt. Bring to the boil then put a lid on it and let it simmer in its own steam until the water gets all soaked up. You might need to adjust the water level, depending on the rice and pan. It usually takes some 10 minutes to cook.

Heat the oil in a large saucepan (I find cast iron is best for curries), add the whole spices and green chillies and cook for 20 seconds. Add the onion and cook for about 4 minutes until translucent. Stir in the rice, spinach and salt and heat through. Just before serving, add a squeeze of lemon juice to taste.

That is a quick recipe, not expensive, filling, nutritious. Even leftovers, reheated, are nice to eat. 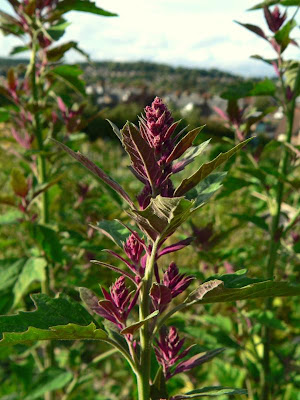 My tree spinach is going to seed now, and I am letting it do its thing.

It will be very welcome next year, and I will try some new curry recipes with it.

I guess the moral of the story is: do not give up on a so so vegetable, give it a second chance, talk to other people that might have used them, and be creative in the kitchen, it might turn out to be so worthwhile!
Posted by M.Paola Andreoni at 14:24