Soft fruit shrubs tend put up a lot of growth over the summer, and the last of summer pruning needed doing to keep the trained forms in check and tidy, so I was asked to start working on currants and gooseberries, cutting new growth back to 1-3 buds.

Against our toolshed, were some currants (Ribes rubrum cultivars), including pink ones, which I had never come across. Online suppliers I researched report them to be sweeter than redcurrants, but also having high pectin levels, which makes them ideal for preserve-making. Essentially, though, they have decorative value as a novelty. 'Gloire de Sablon' seems to be the only cultivar available to the general public in the UK but the one I pruned was called 'Champagne'.

More learning, however, I got from the gooseberries, which came with an interesting story.

In fact, the collection at Wisley was donated by the Cheshire Gooseberry Society, which was one of the earliest to be set up in the mid-eighteen century, as I learned just this week from a booklet I was reading, called The Cottage Garden.

Horticultural societies were popular at the time, generally the preserve of men, dedicated amateurs from the working classes that started benefiting from wider availability and dropping prices of plant material, and  encouraged as a means of moral improvement. Gooseberry took centre stage, as they were a very popular dessert fruit, both fresh and preserved, and easily grown in England.

Dead serious business it was, but if one wanted to take a modern humourous view of the story of the Gooseberry Societies and their ways, they could not put it better than an article in The Indipendent (which made me giggle):


"So popular was the meadow-green berry in Georgian and Victorian times that gooseberry clubs sprang up across northern England – at one time there were 120 – where growers (mostly men) competed to grow the biggest fruits. As men well know, size is everything, so bushes were pruned almost out of existence to allow just a handful of fruits to be coaxed to supersize proportions." 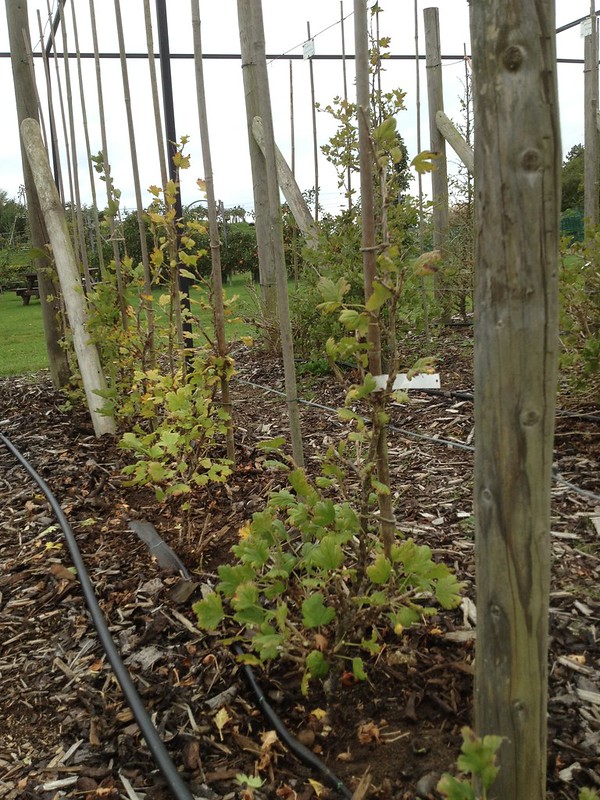 But, according to tradition and in the spirit of the donors,  the gooseberry collection continues to be grown here for their size for display purposes: tied to bamboo canes on a post and wire system, and carefully pruned as cordons. The base of the main stem is kept clear for 15 cm and one stem is grown as leader to reach to the top wire. Sideshoots, however, are grown as fruiting spurs, in a pyramid shape that ensures the plant energy is directed to fruits size, and that the same fruits ripen to perfection as the maximum surface is exposed to sunshine, while at the same time keeping good airflow through the plant.

The cultivars names are really fascinating: from 'Postman' to 'Cook's Eagle' through 'Espera', a testament to the creativity of the Society's members.

Two specimen of each cultivar are planted side by side in the collection, but despite that redundancy, most plants are plagued by American gooseberry mildew (Podosphaera mors-uvae) which causes dieback of shoots, so we were collecting good prunings (some 20 cm long and pencil thickness) for propagation purposes. We also had to sterilise our secateurs every time before starting on a new plant, to avoid spreading the fungus even further.

When the leader of a plant was rather weak, we were encouraged to prune it back to one third of its length in the hope it got stronger, besides pruning the new growth ito 1-3 buds.

I thought pruning these gooseberries required considerable concentration and that the shape of the plant needed careful consideration, to make sure they had the best chance to thrive, but it is possible that with experience I will find it less daunting: I was told by our fruit expert Jim that often people worry too much about pruning.