Fergus Garret and his lovely team at Great Dixter House and Gardens organise yearly working weekends for horticultural trainees, who flock from all over the country to experience the atmosphere and the ways at the famous garden, home of the late Christopher Lloyd.

Of course, like many, I had watched documentaries on Great Dixter, for example British Gardens in Time, but I seem to have always too many things to do to follow up in any detail on a lot of topics, for how interesting I may find them, including by visiting gardens. However, when the opportunity arose to take part in this experience, I was sold to giving up one of my precious weekends at home by my husband's feedback from a visit: he rembered Great Dixter as rather beautiful, and "messy".

I am not someone that goes crazy for socials, but messy I do rather well.

My husband of course referred to beds overflowing with plants and bursting out on the paths, the lush, almost overwhelming contours of swathes of flowers, grasses, leaves... which is what I found, but also a bit more. How can one not like a place where you selectively weed out self-sowers for aesthetic effect? As opposed to the (more traditional) weeding to bare soil, or weedkilling between paving slabs, I mean.


That is what we did on our first day (after being given a special tour of the house and gardens by spirited Rachael): selective weeding. It's so much more rewarding, as you have to know your weeds. And you know that I couldn't agree with that more. A skilled job, in which you get up close and personal with plants, and you exercise your aesthetic skills too. 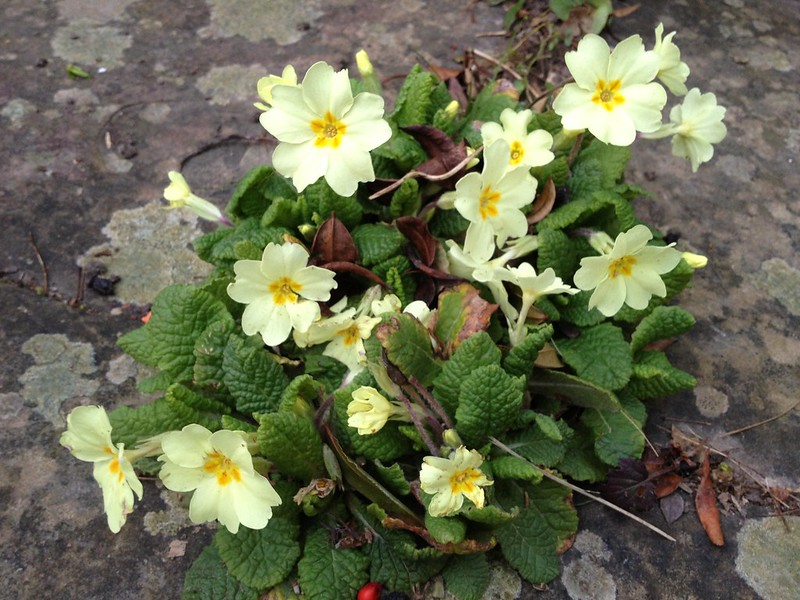 Fergus was at hand all day, providing directions and helping us to identify seedlings and plants, which surely is how one learns.

Something was also said, with which I empathised immediately: a trainee mentioned seeing an interesting Ribes plant that she was interested in for her area back at work, and Rachael suggested they took some cuttings there and then. After all, Christopher Lloyd famously said that nine times out of ten the best time to do something is "When you’re thinking about it; when you’re in the mood." He wrote that in his book "The Well-Tempered Garden", which we were given as a gift and which I have here in front of me.


Plant propagation can be absurdly simple at times; even accidental, as when you put a bunch of flowering currant in a vase and find when preparing to throw it away that the branches have made roots in the water. Of all the fascinating sides there are to gardening, the making more of plants is what has given me the greatest pleasure and interest. [...] After all, it is rather exciting, when you've pushed a dead-looking stick into the ground, to find, a few months later, that it is making leaves and shoots. It's hard to resist the temptation to pull it out of the ground every few days to find out if any roots are forming.

That's it, isn't it? I wish I could put my love for plants and horticulture into words that way. Strangely, I never came across the man before, if not in passing. I read in his bio that he studied modern languages, like me to start with, then moved on to horticulture after the war. I have warmed to him and look forward to reading the book now.

The garden is still managed in line with Christopher's directions, under the supervision of Fergus, who knew him so long and well, and who now heads the Great Dixter Charitable Trust. It is a little jewel born out of love and plantsmanship. The house is not half bad either, an agricultural property sensitively restored and expanded by Nathaniel Lloyd, with the Great Hall (where we spent the night, chatting away by a glowing fireplace) dating back to the 15th century.

Walking around at sunset and early morning gave me the opportunity to enjoy their quiet beauty on my own, with a sountrack of birdsong. It was a good time for me to reflect on my gardening experience of the last few months, what I have learnt and enjoyed, and to start considering what to do next, inspired by what I had seen and heard. 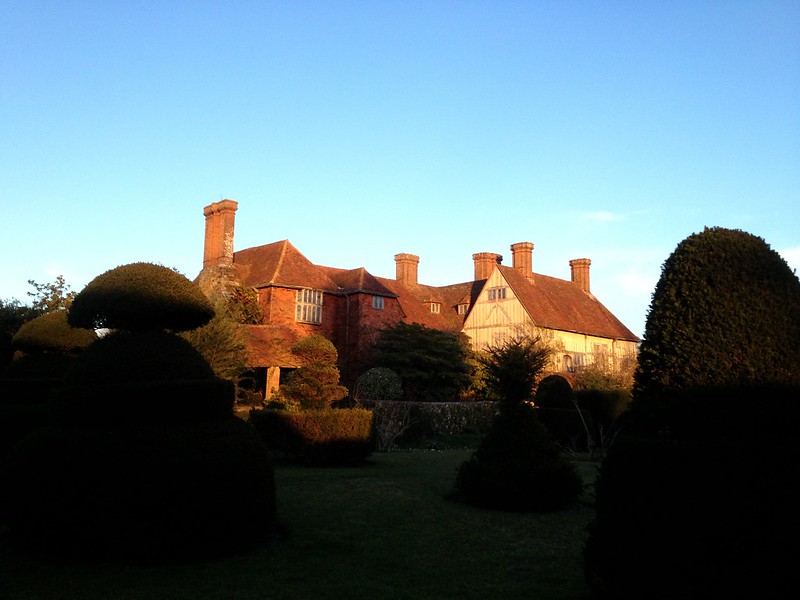 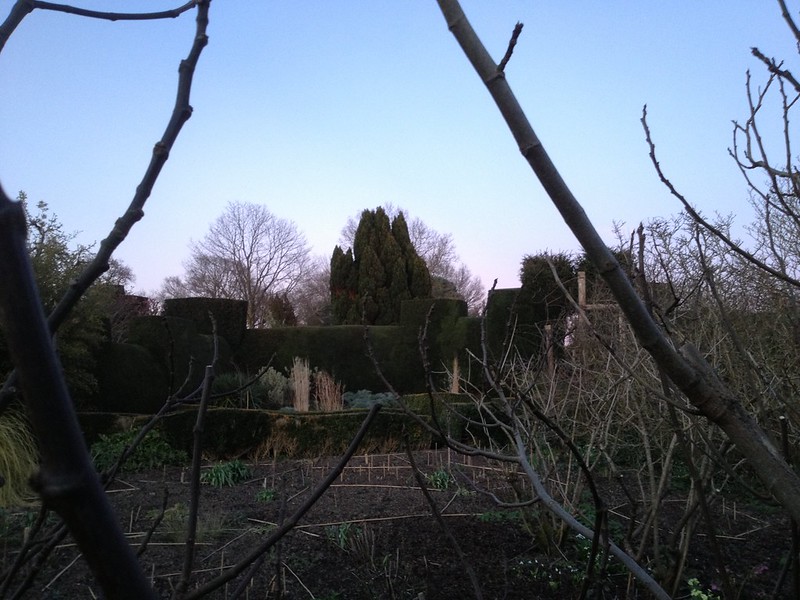 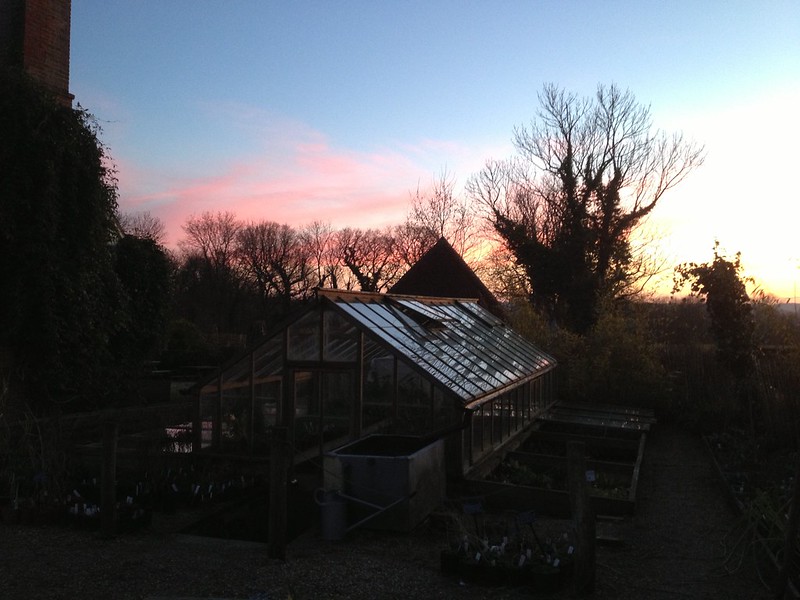 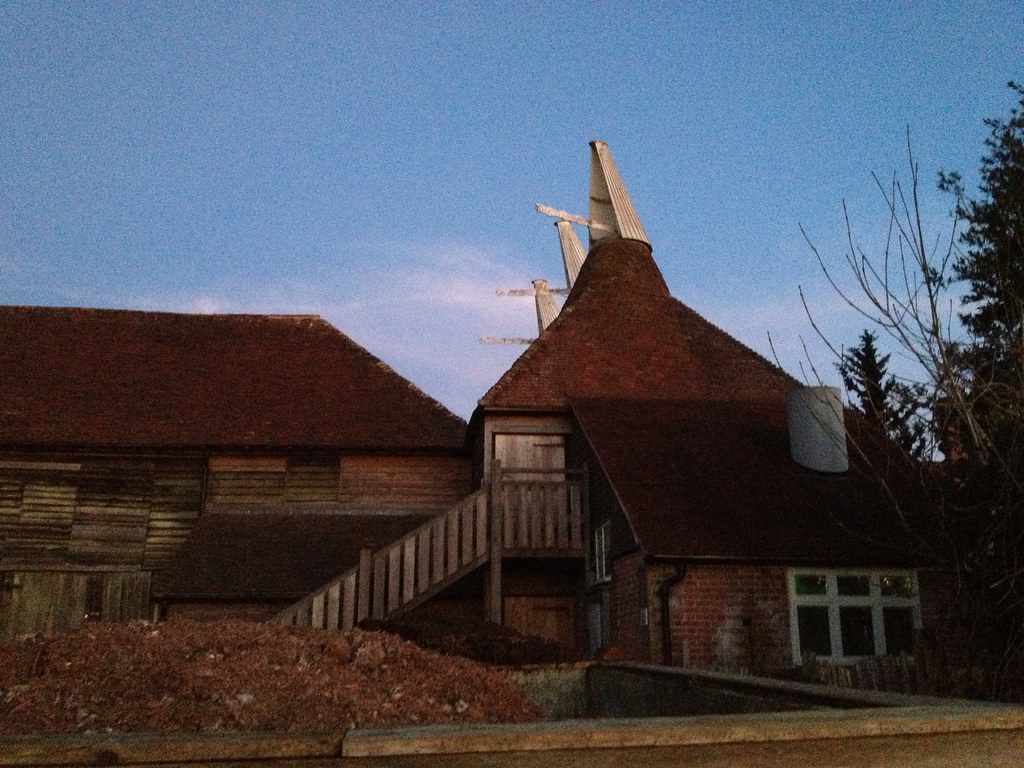 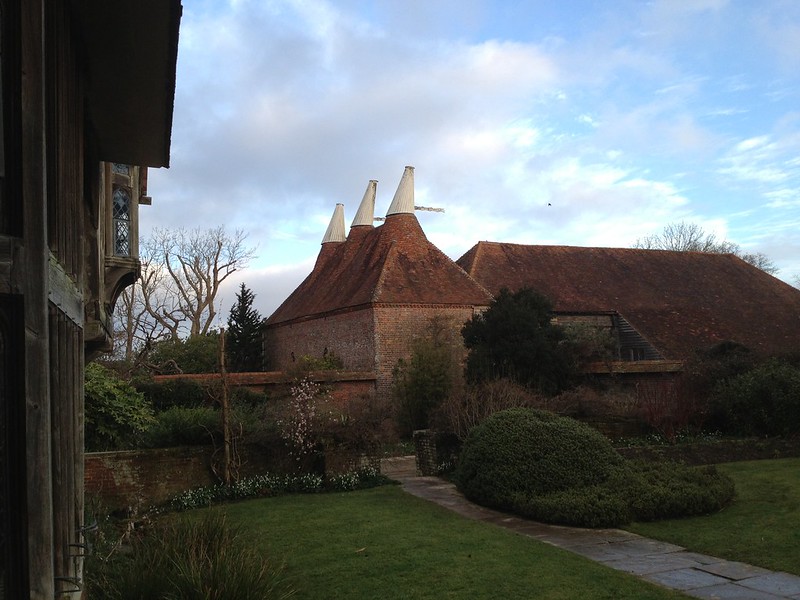 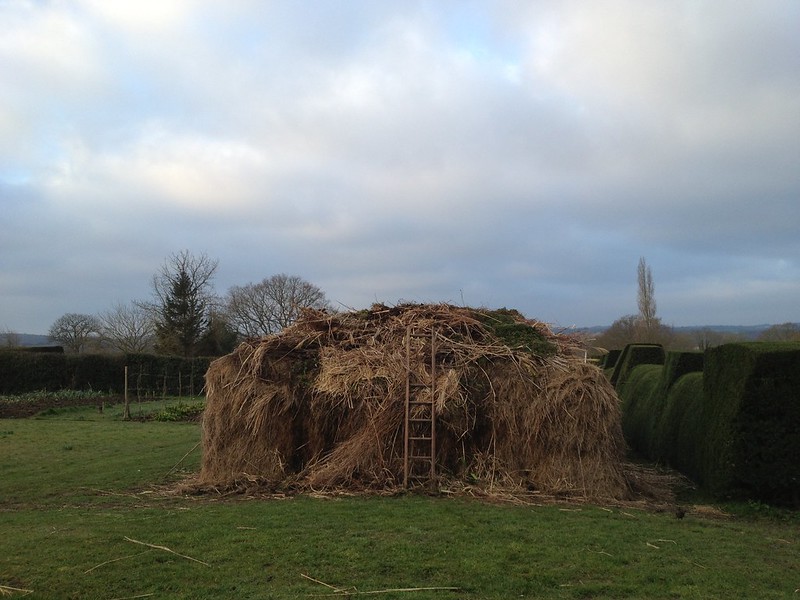 The following day, after freeing Gunnera of their winter cloaks, by the side of beautiful ponds,
we spent the afternoon building a giant wildlife stack with logs and branches from the woods on the estate. A beautiful structure, it was great fun to build, and the cheerful labourers all gathered around (and on) a tractor, gave me a glimpse of what one must have felt post-harvest, at a time pre industrialisation of agriculture. It was a light hearted feeling of shared achievement, having made it to the end of hard work, facilitated by the attentive team: Rachael, Jonny, with Mike (from Germany) and the interns (from Sweden, China and Japan!): an international "family" headed by Fergus, which struck me not only as a knowledgeable gardener, keen to share and support us, but a warm and rather enthusiastic person. 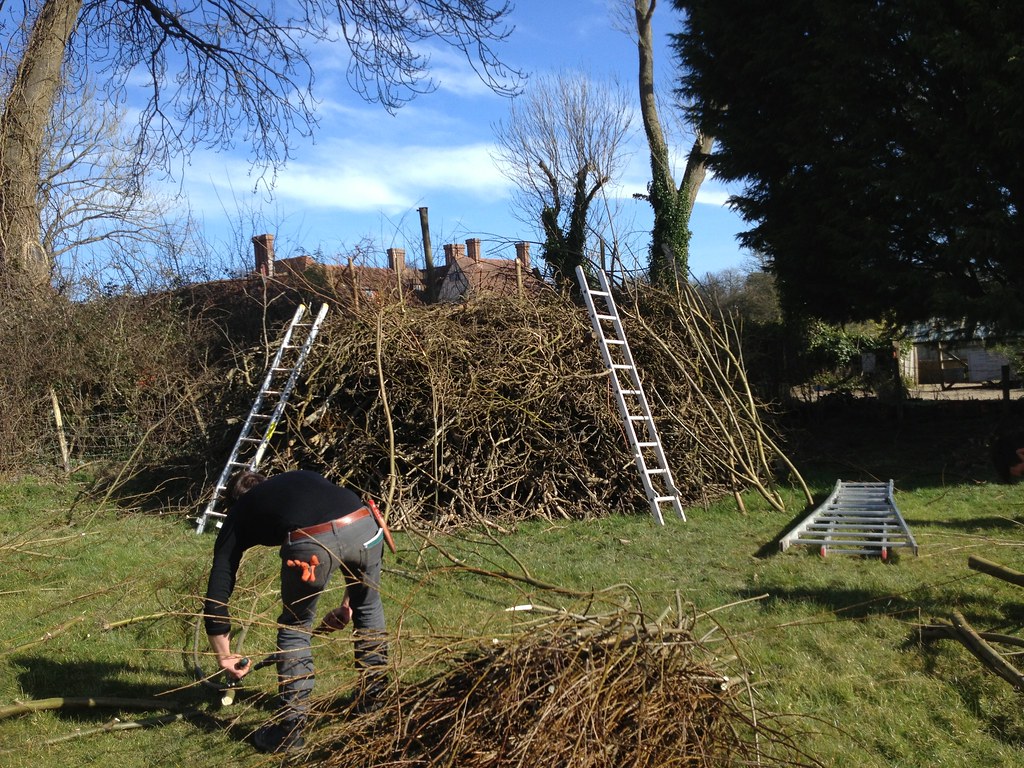 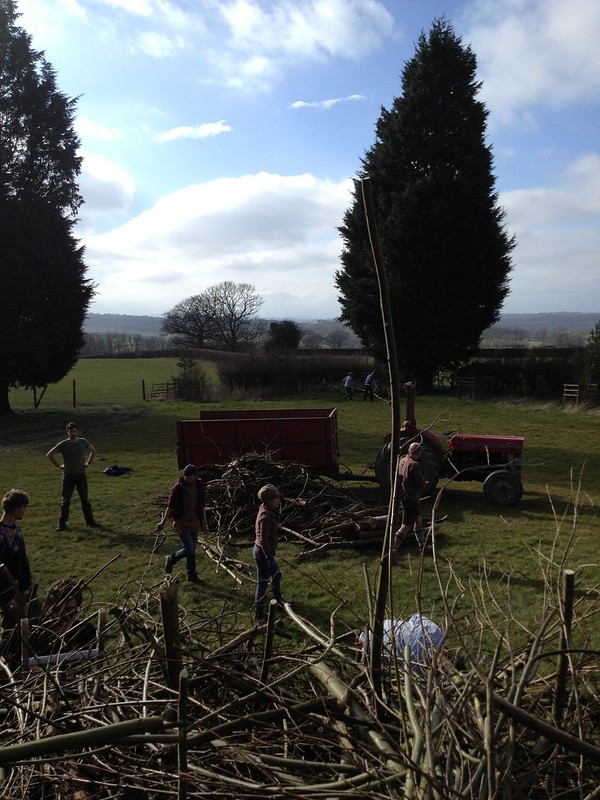 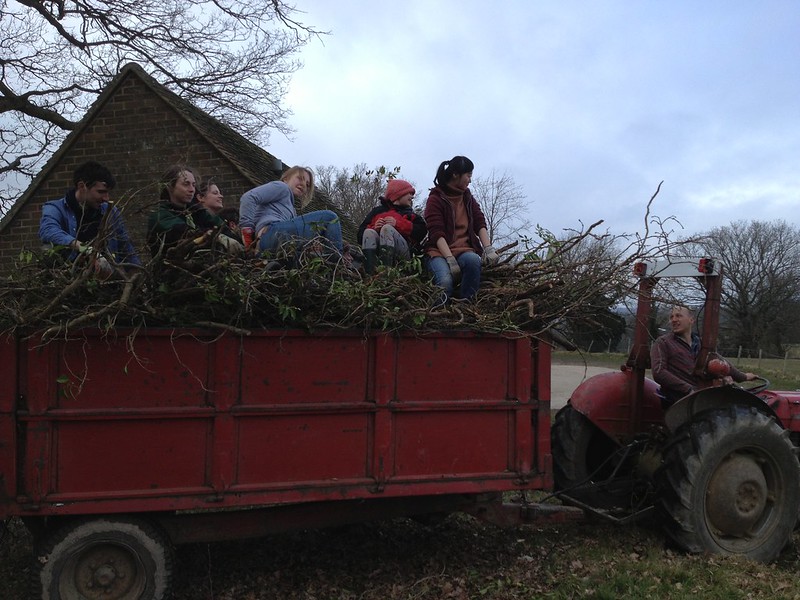 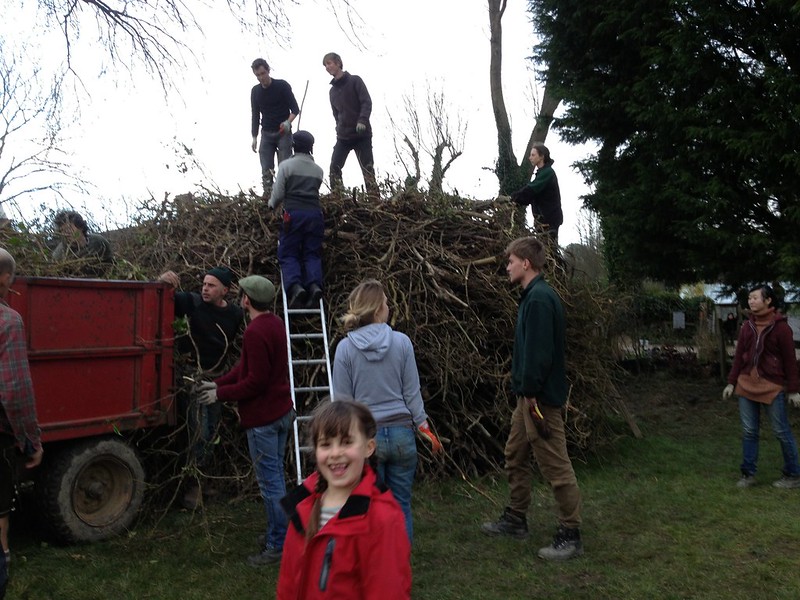 Well fed by Aaron throughout the weekend, we were very lucky with the weather too, as the forecasted rain never materialised.

Before leaving, we even got a tour of the working barn, where sweet chestnut from the woods is turned into hurdles, benches and ladders (providing local employment for 3 people), followed by an amazing demonstration of wood splitting, by untiring Rachael!


I am glad I decided to take this opportunity: it was fun and well-spent time!


Although we have been priviledged to engage so intimately with the gardens, Great Dixter is not only for the initiated.

The gardens will open to the public at the end of March, when the Spring Plant Fair kickstarts the season. I will have to go back with Gianfranco and experience the "messy" planting in all its glory (and how much caring and hard work goes into creating that "mess", people need to know!).

There is also a nursery on site, with an online catalogue, bells and whistles, that also sells via mail order, all year round (she wrote, adding the link to her suppliers' list).
Posted by M.Paola Andreoni at 23:18

Email ThisBlogThis!Share to TwitterShare to FacebookShare to Pinterest
Labels: horticulture