That is the title of a book I borrowed from the library to learn a bit more about coppicing, as back in February I joined my colleague on a trip to the RHS coppice in Wisley village to cut some hazel for sticks, and fell in love with the magic of the place, albeit slightly derelict as it is has not been actively managed for a while. 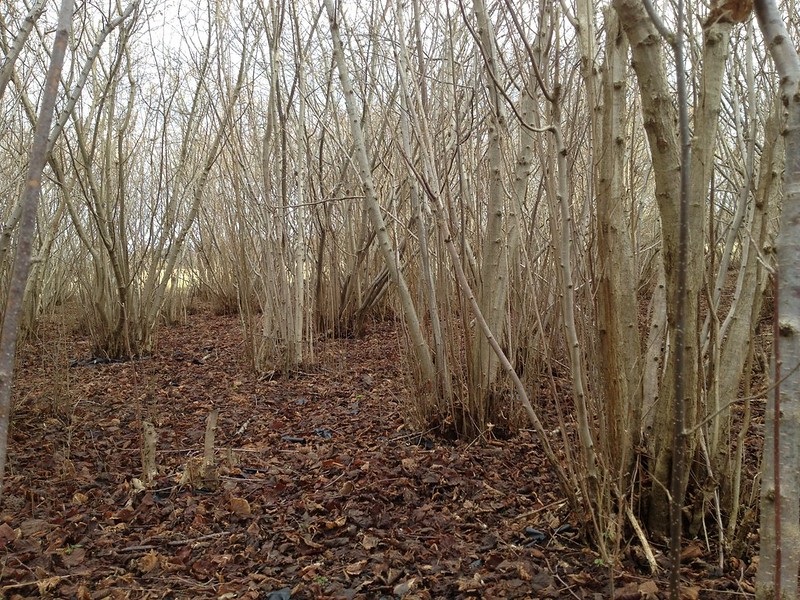 We cut just a few sticks, that were of the right size for our purpose of supporting sunflowers: 3 m long rods that were not too thick at the base. But what is the best way to coppice a stool? Some of the stools were cut higher than others, part of the stumps had died back and were rotting: how high does one cut a stool?

I came away from the coppice with a lot of questions, and wishing I onwed a piece of woodland, I thought back once again with longing at all the ones that I always see up for sale in Devon, on my way to an holiday.

The book tells me that hazel coppices are usually managed in a 6-9 years rotation. In the UK, they are usually part of a coppice with standards silvicultural system, which means that the short-rotation coppice is interspersed with longer lived standard trees, that make up about 20-30% of the canopy, and are coppiced in turn on a longer rotation.

I also read that the most productive hazel coppices have a stool density of 1000/ha that is a 3 m x 3 m spacing.
I observed when I was on site that good spacing is essential for dragging the wood out the coppice, but apparently closer trees grow straighter rods as they compete for the light. And, in any case, coppicing should be done by area (or "coupe", that should be no less that 50 sqm according to the authors) rather than picking the odd rod here and there, because the cycle of shading of the ground (at canopy closure, to get rid of all undergrowth and make for a safer working environment) and light (to stimulate growth in the coppiced stools) are all important for the coppice health and ecosystem, with all the attendant biodiversity.


Although historically coppicing has been done at different heights, a convincing explanation of which was not found by the authors (I was once told it was to protect the new shoots from rabbits and other grazing animals), cutting right down to the ground is the best practice, some say with a slant from the centre of the stool outwards.

Hazel is usually coppiced for clear rods, but here at Wisley they also coppice birch as a sustainable
alternative to bamboo canes (which are imported all the way from China), which can be woven into rather decorative plant supports. Birch coppices for  sticks are shorter lived than hazel, as, at 20 or so, mature birch develops a droopy habit. Birch cycle is similar to hazel though, at 7-9 years.

While I've not seen the birch coppice myself, I did order two bundles of birch to support sweetpeas and Apios americana in the Cottage Garden, but had never woven it together. Therefore, I was delighted to be given the opportunity to develop the skill, when I was asked to come up with a suitable design (and implementation) of broad bean support for the vegetable garden.


I drew inspiration from a structure that had been in the Cottage Garden last year, to support raspberry canes, and between myself and Mario we came up with an structure that would be functional. It took me a whole morning to build the first one, but Mario was satisfied and I was rather proud.

One week later, it took me slightly less, at 3 hours, to build the second one. 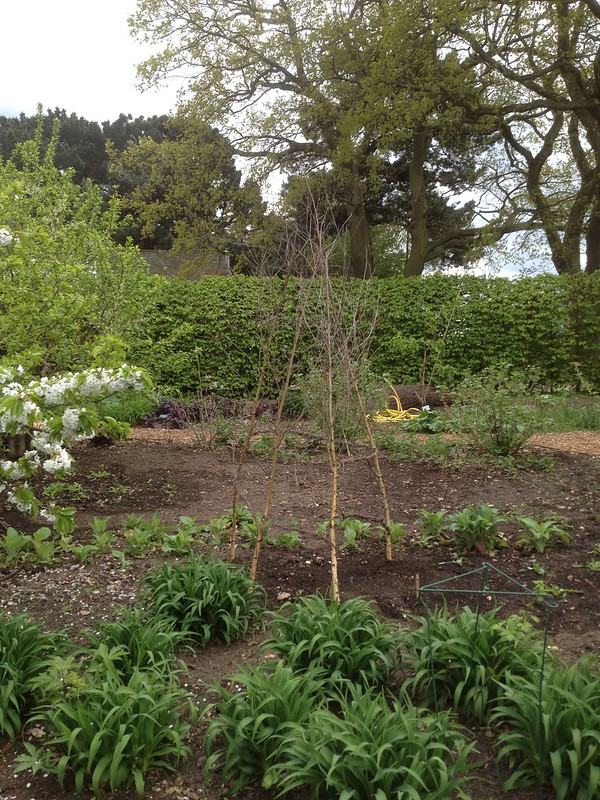 Made braver by the pleasant results, I have now started making a tepee for my Apios in the Cottage Garden too.

It is a rather satisfying job, with a very tangible outcome!

Email ThisBlogThis!Share to TwitterShare to FacebookShare to Pinterest
Labels: Wisley