Most seedlings are out now

Suddenly al the seedlings are coming out together: this is the most difficult stage for me as I am not too good at potting on - a very delicate phase, with a lot of pressure to find suitable space.

I have prepared the greenhouses for the chillies already, and the tomatoes that I transplanted straight from the seedtrays to the ground under a tent seem to be doing fine. The cardoons that I planted out to save from slug & snails look on the mend as well.

Strawberries, redcurrant, gooseberry and blackcurrant are flowering. I wish someone got the shoots and self-seeded soft-fruits off me before they die in the small pots. I also have borage seedlings and plenty of mint that I could give away.

As I really loved the soup the other night, before leaving I decided to try some more nettles: you are only supposed to pick them while they are young in spring - which is now. It was already darkish, and an odd, gloomy feeling took hold of me, as if I was in the process of stealing, much as little Eliza must have felt in the childrens' story "The Wild Swans" by H.C. Andersen. 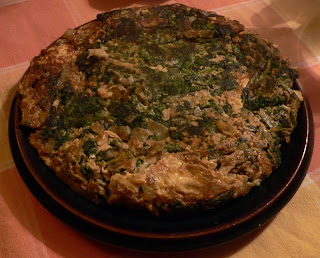 Anyway, I decided to make an omelette this time. It was lovely and I have some leftover for lunch today. For the recipe, I proceeded as per the soup until just before the flour/milk/stock step and added a sprinkle of white wine instead. I then whisked 6 eggs with some parmesan and mixed it with the wilted nettles straight in a pan, where I had heated some e.v. olive oil.
Another recipe I found suggested to chop the nettles finely and add them raw to the batter instead.