As I am not very good at potting on, and I have a bit of time pressure, I went for the planting out option. 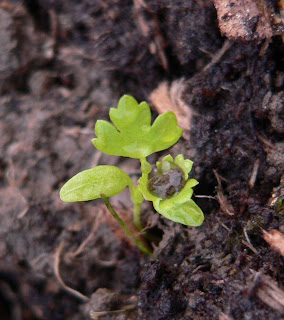 I started with celery, possibly the tiniest seedlings. It feels like yesterday that I was doing this before, but it is actually over a year: it did work - except that I got a ridiculous crop from leaving the celery thirsty over the summer - then I left it in the soil over winter as I had no time to pick it... but three plants are still alive now so I will give it another go.

Transplanting tens of tiny celery seedlings gives you plenty of time for thinking (I think it took me a good couple of hours) - read: it is quite boring, so to make it more interesting, I mentally registered all the steps to write about it. Here you go, my...

Step by step planting out process

Seedlings are ready to transplant when the first couple of true leaves are out; these may come after the cotyledons or seed leaves, which in several species is the first pair to emerge out of the compost (they look different from the others). Celery was ready.

I waited until later in the afternoon as the sun was too strong and I would have risked wilting and/or scorching. Overcast days are said to be best, but I usually do it in the early evenings (because that's when I am around). This is not ideal, however, I suppose because overnight the plants do not do photosynthesis, which by and large is the main way water moves through the plant. Moreover, you unnecessarily expose your seedlings to slugs. Anyway, the pre-transplant soak seems to sort them, and I use a little ferric phosphate for the slugs - which incidentally seem to have been less active lately (I hope I will not come to regret saying this :)).

When the sky got hazed, I first did something that might sound obvious but that I have forgotten endless times: give a good soak to the seedlings and let them absorb the water: it is stressful enough to go through a change of temperature and soil - possibly after some bruising of your tiny stem and leaves and with some of your roots ripped - without being starved for water.

I grow my seedlings in cardboard punnets, easy to rip apart to get to the block of compost from which delicately to extract the seedlings - possibly without even touching them, just handling the compost around the roots. However when that does not work, I pick seedlings by the leaves - I read one should leave the stem alone.

Having digged some trenches at a suitable depth and distance from each other (the seed packet often specifies), I planted the seedlings with as much as possible of the original compost and pushed the soil around them.

Then, I re-writed the label in felt pen (they tend to discolour and I forget which species I have grown in a particular place!), and with my watering can with a fine rose I watered around the seedlings: any one seedling that was knocked down or sideways needed the soil firmed around them. Roots absorb both oxigen and water from the soil - compaction and waterlogging prevent them to breathe, but air pockets may cause them to dry out as there is no contact between the soil water and the root hairs in charge of absorption.

I finished by covering with fleece, to minimise temperature variation from the greenhouse and to prevent direct sun that might scorch them at this stage.

Finger crossed, and I will now keep an eye on them for the next few days. I have overplanted anyway, so if any casualty occurs, I should feel it less painfully.

P.S. Warning - I read that same night that the potting on process and gradually hardening off the new plants - by putting them out in the day, not in direct sun, and bringing them back in at night - ensures they keep the head start you gave them by sowing in the greenhouse environment. Planting out too early can stunt growth - apparently some seedlings don't recover until as late as July! Anyway, I do the best I can given my circumstances...
Posted by M.Paola Andreoni at 22:28

Thank you for explaining this so well!

I have my two first seed leaves from my courgette seeds and it's good to know that I'll have to wait for the true leaves to show up.

I hope you're well! Best wishes,