aJuly is the time of endless bounty of soft fruits. This year it was raspberry first, followed by gooseberry and redcurrant is just coming now.

Pound after pound of raspberry for dessert were getting a bit too much, so I have frozen some for later on (trick to keep them whole I discovered is to dry them thoroughly), but I have just a small freezer. Last night I tried a River Cottage recipe for bottling them with gin and syrup. It was very easy, quite rewarding.

It takes:
Make the syrup by slowly bringing to the boil water and sugar, stirring to dissolve it. Keep warm.
Pack a sterilised jar full of raspberries, pour the alcohol and then fill with the syrup.
Put the jars in simmering pan at body temperature and bring to 88C simmering point over 20 mins, leaving to simmer for 2 mins

- from Pam Corbin's book on Preserving -
Will have to check that the lid is airtight, which is done when cool in 24 hours.
You know, I am really at the basics with sterilising jars and checking bottletops and airtight lids: still learning the difference between "Le Parfait" (with metal buckle, particularly difficult for me but the most common here in the UK it seems) and "Quattro Stagioni" (with screw lid) handling practice, and I am so scared of poisoning someone by mistake! I have so many questions, for example: is condensation ok? It could lead to moulds, but how do I prevent it? And if I close the lid when the jam is cooler, how do I get airtight?

I wish I had learnt from grandparents/aunties before those skills went mostly lost in the 70's. I wish I had been interested enough, for example, to learn how to bottle aubergines from my grandfather, who made delicious, spicy ones. Anyway... books should help, and I think it will be a good idea to take a preserving course - the one I did on breadmaking was such an eye-opener!

I also made gooseberry jam, but - same as last year - I added too much water so I had to cook it forever still to have it soft. 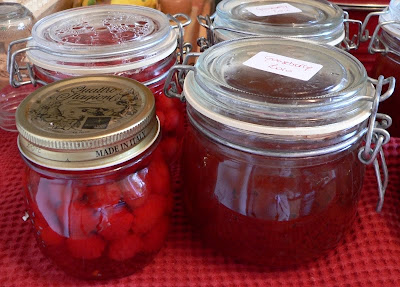