As I mentioned before my short holiday break, I have been doing more preserving, particularly of wild berries - something that this year has really possessed me: I have to do it, to try how it tastes and can be saved for later. 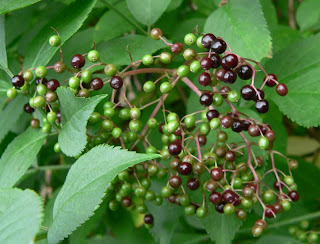 I tried an early hawthorn jelly, which set so hard because of the unripe berries that it stuck to the lid of the jar: as my colleague observed, the first ever upside-down jelly... But elder berries are what really fascinates me. I have tried two recipes for liqueur, and the one from the German-speaking part of Italy which is called Holunderlikoer tasted so good that I wanted to have a go at elderberry jelly too. Throughout the holidays I could not look at an elder without coveting the berries. And as soon as I came back last night I grabbed some half-kilo and set about processing it, finishing well beyond midnight.

Here's the elder recipes, roughly, in my own style.

My problem with jam-making seems to be pectin levels, or the setting point: mostly I get rather loose texture - even though it tastes good, as was the case with my raspberry jam - 500gr jar all vanished on our holiday, deliciously (and a bit messily) spread on clotted cream and homemade scones (not my own). Any suggestions from expert jam-makers?

And with liqueurs I had  to play around a bit before I learnt how alcohol dilutes (in Italy they sell 95% vol alcohol for preserving and liqueur making and that is what the recipes suggest, so in the UK, supposing you use clear vodka, or eau de vie, the resulting liqueur will be weaker, or you will have to use less water in the recipe). You might find it useful to know the formula:


Shall I say here: drink responsibly?!? I would hate that. I assume that people have enough self-respect not to drink themselves senseless and are wise enough not to damage their own health. Drinks, and food, are made to taste and enjoy consciously. I do not want to be associated with any idea that I might promote drunkenness, which I find so stupid and dangerous that I cannot bring my head round why people binge-drink at all.

Holunderlikoer (loosely translated)
Boil the berries in the water for 15 mins ca (depending on the quantity more may be necessary). Sieve the pulp through a muslin. Put the liquid back in the pan with the sugar and vanilla for another 15 mins ca (always depending on quantity, until the sugar is melted). Let it cool down before adding the alcohol, mixing and bottling. Leave the liquour to rest for a while to improve flavour.


Elderberry liqueur (loosely translated)
Put the berries in an airtight jar with the alcohol and lemon rind and leave for a fortnight. Remove the solids.
Make a sugar syrup with as much water as needed to dilute to the desired strength and the vanilla, simmering until the sugar is melted. I guess the quantities can be made as per recipe above. Take out the vanilla and mix with the alcoholic infusion. Leave to rest for a few days before passing through a muslin and bottling.

Elderberry jelly (loosely translated)
Squash the berries and simmer on low until they look soft enough to sieve. Add the sugar and vanilla and bring to the boil until setting point is reached (cannot help you there!). Bottle in sterilised jars according to usual preserving procedure.


---
Cornwall is such a paradise and the weather was so great, it was hard to leave. However, it was good to get back and see that the allotment is still in full-blown production, despite the increased activity of slugs and that blooming bird that shamelessly enjoyed my second ripe fig. Look forward to tasting the grapes!
Posted by M.Paola Andreoni at 01:46

The only alcohol I have ever tried to do is the sloe gin and damson vodka. They are sitting in the garage at the moment and last time I tasted them they were very very sweet.

I am going to make an elderberry cordial today. If the pigeons leave any I will try and pick some more over the weekend and try for some jelly too! all the best, Joanna