Happy birthday to me...

All week I have been thinking that - although I do not mind the ducks and did not see any damage done last year - they might annoy someone else on the site. Punctual as death the question came today: did you see the ducks on your plot? They occasionally nibble on young growth...

There were three in fact, and they start to be a few too many all considered. And although surely any nibbling from the ducks is nothing compared to the devastation made by pigeons, rats and slugs, I have spent all my time at the allotment fencing off the pond and covering it with netting so that ducks cannot access it but frogs can. I would not want to receive a letter asking me to earth up the pond after all the work that went into it. 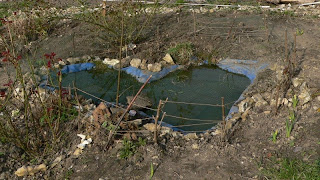 As the ducks came back, the fencing seemed to work: they looked questioningly around and then at each other without attempting any breaking in, before I shooshed them away again - btw, they flew to the other end of the site, where they used to stand in the puddles of water that collected on plastic sheeting. As the neighbour remarked: not very smart animals, you would think the canal and streams in town would make them more than happy. I agree.

On the subject of living creatures, I have put a rat trap in the greenhouse (with butter and blue cheese rind as bait) as planned. Perfect timing as I had the unfortunate experience of seeing rats running around behind the shed in broad daylight today, and I am pretty sure I heard a neighbour also scream at a "6 inches" rat. It must be spring. If I catch anything, then the trick will be how to kill without blood. Could drown it in the pond :/

Speaking of vegetables, seedlings are starting to appear:

I uncovered the herbs patch, and all of them were ok except one. Very few broadbeans were out though: I will have to see if they come out next week, given that it should rain, otherwise I need to top up with new seeds. Onions are starting to put leaves out but no sight of asparagus yet. Two artichokes seem to have survived but I am afraid the vines are really dead. Daffodils are out and lovely green leaves are starting to appear on gooseberries, including the cuttings. Rhubarb has mad enormous buds and two leaves.

I have started the major task of spreading the remaining manure at the bottom of the allotment to level the ground which is now sunken. Someone had dumped rubbish underneath it...

Not my best day at the allotment, especially for a birthday.