Did I tell you my boss was a pretty incredible woman? Well, last week she came in the office with something else for me, and that seems to have solved my duck problem: green netting, with small holes, the perfect size! I put it on the pond and, after a little bit of incentive to leave yesterday, they did not seem to have been back :D 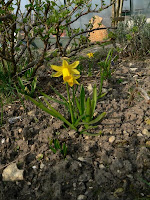 That and the fact that British Summer Time is back and I can go to the allotment in the evening after work is cause for rejoicing: EVVIVA!

Tonight I planted a chilli that does not seem to be recorded in my database: I was disappointed to find so very few seeds in the packet, but hopefully they will work out. However, the chilli pyramid I planted a while ago has not come out yet. It might be that so far I have only watered the trays once a week, in the weekend, which is very little indeed: if seeds germinated and then dried out, all the peppers, tomatoes and aubergines planted so far may be lost.

That sounds like a pretty appalling failure rate: "would I mind more if I had bought fewer seeds?" I asked myself while coming home, after noticing that my neighbour is seriously and frightfully 'professional'... Over the winter he has digged all his half plot, sifted the soil of stones to grow carrot, laid out perfect looking beds and built some impressive polytunnels... luckily I do not feel inclined to get competitive, but I have heard that that things can get really tough with some passionate gardeners!!!

More than anything else I enjoy pottering about and mucking in - which by now you should know I mean quite literally! Tonight I found myself singing aloud: isn't that great? That happens very rarely to me... So any edible results are a bonus, I guess.

Crop-wise, I still have to plant my extraterrestrial potatoes, or in fact any other potatoes. I counted 16 plants of broad beans Aquadulce (overwintering) which is few, especially after the rain of last week, but the Express ones I planted this spring seem to be more successful. I will wait a little bit more then have to consider topping up.

In the greenhose, chamomile, having already put out its cotyledons, is now producing tiny leaves, and the minuscule celery seems to have survived so far. Oenothera also looks as if it is coming out.

I am still picking leeks from last year: a full bed to go - leeks is most definitely worth to overwinter, easy to grow from seed and reliable.

This year I will try cauliflower again: given that last year it was a disaster, with no apparent germination, I will try planting seeds in trays rather than in the ground and - as a backup - I have bought some plants of the following, exotic-sounding:

The opium poppies seed I scattered at the back of the shed have come out, while daffodils around the pond and shed look battered (unlike the ones in front of the greenhouse - in the picture above, with guardian sheep in the background).

There is sign of rat activity... however, my trap is still there, empty.
Posted by M.Paola Andreoni at 21:29