... This post is a rewrite of the one that went lost in the ether that is the mobile network, so I will be brief...

I spent a fairly long night weeding a few beds, and found that the winter spinach I planted and thought had never come out, had in fact graced me with some leaves - albeit out of season - that I had for dinner.

Having then planted all the leftover potatoes I set myself the task of picking the last of the leeks, as most of them are going to seed after overwintering through a long fruitful season. Pulling something that looked like a thick clump of long grass, I was surprised to find in my hand a 'mysterious' type of alliaceae! 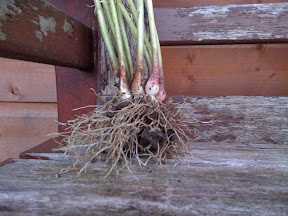 Although it does not have a wrapping skin around it, I came to the conclusion that it must be garlic from last year, either leftover or self-seeding! Neighbour Keith suggested that I split it into cloves and replant it, which did not seem like a bad idea. So out of 5 such clumps I left 3 in the ground, while I transplanted the split cloves of the other two.

End of surprises for tonight!
Posted by M.Paola Andreoni at 22:43