Having cleared the broadbean and onion beds, I filled in some empty space with the leftover onions: hopefully it's not too late for them to grow. As one of those bonuses that nature often bestows on the amazed newby gardener, I got 8 unexpected garlic plants from seed, which I also planted.

Here goes the story: having left some garlic go to seed last year I had picked the seedheads and left them in the greenhouse, not for one second seriously contemplating a future for them, just out of habit. While watering some seedtrays last winter, I accidentally knocked the said seedheads, which fell in a tray. I was in a hurry so I just left them there... and there they were, appeared one day among the aubergine seedlings! 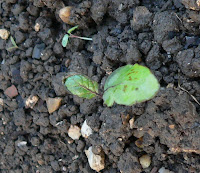 Dealt with the solanaceae, and realised that - although they have indeed suffered - there were more survivors than expected.