Alliaceae in place and hibernated ladybirds too

Yesterday I spent another four hours at the allotment, and I finally planted all the Alliaceae: garlic Vallelado (plus two species Neil gave me), onion Shakespeare, shallot Vigarmor.

I have never seen so many hibernated ladybirds; actually I had never seen any in the previous two winters, so I guess that is a very good sign - they were all native as well.

The ones below were in my compost heap, but I found another four while digging - I picked three and put them on the pallets around the compost heap, for shelter, one I lost in the undergrowth. Frankly, that has put me off digging a little bit, and clearing the plot does not feel too good at this time of the year either. Obviously it is confirmed to me that native ladybirds like messy long grass and weeds - a habitat that is increasingly lost. 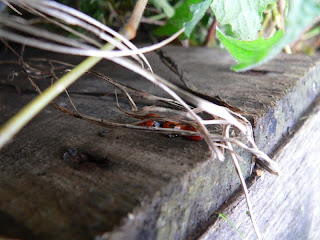 Will have to figure out how to keep an area in the plot that is messy enough, even when it's not by mistake like this year. This is in the interest of nature and also of my gardening finances: a pack with 25 ladybirds against aphids' infestation sells for £20+!
Posted by M.Paola Andreoni at 15:50