I came up with the almost-perfect sage focaccia recipe, I tried it twice and both time it was good, so I can share it: was fairly easy!

Anything from 350gr organic flour, I mix it with a handful of wholemeal as well, a pinch of salt or two, yeast (1 teaspoon fast action yeast), enough lukewarm water, added a bit at a time, so that the dough does not become too sticky and impossile to take from your hands. It must be elastic but not wet. After kneading for around 10 mins, make a ball, cover and leave in a warm place (I leave it on the hob while the oven warms up below).

Leave to raise for a minimum of half an hour to two hours. Chop a handful of sage in the meantime, in tiny fragments and soak in extravirgine olive oil. Halfway through raising (depends how much you leave it) mix the sage and oil with the dough - it will be a bit squishy-squashy, but you make the ball again and leave to finish rising. Turn on the oven to 7 at least half an hour in advance.

Step 3: place in the oven

Find a heavy rectangular oven tray with low sides, oil it with extravergin olive oil, spread the dough with your hands, cover with more oil, sprinkle with salt and pierce here and there with a tootpick or a fork.

Cook for half an hour or so, until lightly brown. The perfect focaccia has oil-filled 'dimples'. And I managed to get some: delicious! 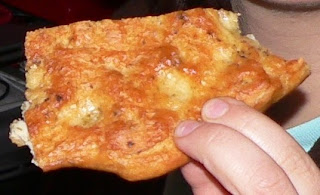