It's March 21st and definitely the start of spring: ladybirds busily hurrying about (all natives too!), the amazing green of new leaves just out of buds, spawn in the pond (at home) and... the mallards are back, three of them (at the allotment)! 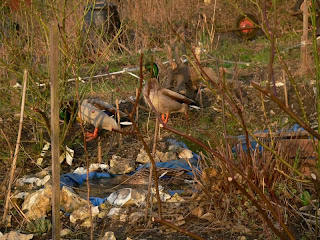 I love those three ducks, they are so beautiful when they lazily pull themselves out of the water, or walk in. Neighbours might worry that they eat their vegetables (that's the first thing my auntie said when I mentioned them) but I have done some research and here's what the WWT says:

"Mallards are dabbling ducks and are usually seen looking for the leaves, shoots and seeds of water-based plants. When these are submerged, the ducks up-end yet it has been known for Mallards to graze grasses, including cereal plants, as well as to deliberately shake vegetation to loosen any seeds and invertebrates that were out of reach. Mallards will also eat insects and their larvae, small fish and when the need arises, will even eat small mammals. Their tolerance of people has allowed them to make the most of any food that is freely given."

so they are more likely to be the reason why no frogs have taken residence in the allotment pond than to cause any damage with the veg.

And talking of frogs, last week was a hard one: as it rained for the first time since the good weather, all the frogs came out to breed and just down the road it was a massacre: I counted 9 killed, 1 wounded and in distress - very very unpleasant images are still at the back of my mind. 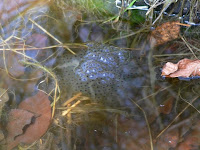 I had no idea I was so keen on frogs, but now I do, and this morning, when I spotted spawn in my home pond (which is tiny), I decided to dig another one and make a log pile, so that more of the slimy creatures can come and stay in my garden.

Over the week I learned other facts about them: they do not eat for the whole of the breeding time and they can drown while mating! Frogs have an urge to go back to the pond they were born into, so the few I rescued from the road were probably back shorly after I released them. In the UK there is a charity that monitors amphibian & reptiles.

Anyway, I finished long after dark, and the mother frog watched me closely all the time - I had never seen her so exposed before, usually they hide under vegetation.

At the allotment, I did up two beds, and sowed some seeds: and a few had started to come out The leeks have self-seeded massively, and are growing fast, so I am considering keeping the bed for one more season - they seem healthy, but that means I will have to make space somewhere for the cardoon next week, as it will be ready to transplant.

It was great to be out in the sun, and although probably tomorrow I won't be able to move a single muscle, it was a great way to spend the first day of spring.
Posted by M.Paola Andreoni at 21:01