There is an online Flash video that my husband used to find amusing, and that I was reminded of last night when I thought back at what had happened. The relentless pace of the season's rhythms, and the sudden, unexpected (both good and bad, although it feels mostly bad) popping up here & there when you deal with nature.

A bit annoyed that I lost in the ether the post on mushrooms I was writing on the train, but still glowing with the success of my new crop, I arrived at the allotment last night and had an exchange of pleasantries with Paul. 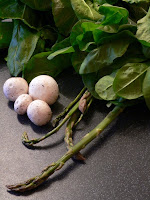 One step back. On Monday I had picked my first four mushrooms: an easy crop this time round, I was already planning to grow more at home in the garden, as allotment space is running out, even though the space/yield ratio for mushroom is excellent - unlike asparagus, as I was writing in my lost post. Eureka! Now that I am writing about it again, I have had a great idea: could grow them on top of the beasties' hotel, behind the shed!

Anyway, back to last night, I come to the plot and HORROR! The asparagus bed was smashed to pieces and trampled on. I got duly upset, as I do nowadays with any act of pointless aggression. The rat cage was thrown on the path. My boundary line on the other side of the bed had snapped. No other damage around, I checked with Paul as well. First thing, I thought: humans, but there is a possibility it might have been an animal, trying to open the cage to get at the bait, and going on a rampage in the process. However, damage is so localised that it seems unlikely, unless the animal was very intelligent and careful, taking the cage from the top of the allotment, dragging it halfway through it without leaving any traces, just to go berserk on my asparagus bed. However, some digging of the soil suggested animal. Badger, fox, dog, cat?!?

Not happy with cats either this week, as neighbour's has taken to sitting next to my pond at home, with the result that all the damselflies and frogs have disappeared suddenly. I sincerely hope they were not harassed and killed...

Anyway, I pulled together, fixed what could be fixed, and proceeded to dig up some space for the sweetcorn, which must be planted in blocks rather than lines as it is wind-pollinated, and clustering is useful to get the pollen from the tassels falling onto the silks.

In the process of digging, I found two sage seedlings, self-seeded: a nice surprise, the first happy note of the evening.