Finding a use for mint 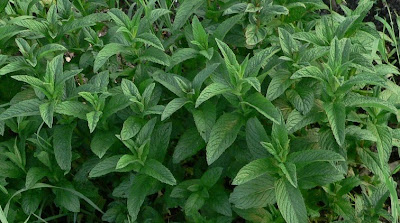 Mint is invasive. But it is a pretty plant, and smells good. So I have plenty of mint. And I have been happy to give it away to whoever might be interested, for their Pimm's.
Mint can also be used to cook lamb, but I do not like it much that way. As I had to pull some this weekend I decided to find some other way to use it, and in the meantime learnt more about the herb.
There are two main types of mint: spearmint (Mentha spicata L.) and peppermint (a hybrid of spearmint and watermint, Mentha x piperita). You can recognise them as spearmint is sessile (without leaf petiole or stalk) and flower cluster are more pointed than peppermint's, whose leaves stand on a stalk. Flavour in the two mints is different because it comes from different substances, with the more peppery peppermint's coming from better known menthol.
Mint's qualities are claimed to be several: fungicide, insecticide, antioxidant, deodorant, refreshing and so on. A recent research seems to have claimed that spearmint tea drank twice a day may even reduce mild hirsutism in women!
With my excess mint I have decided to make icecream and followed a rather rich Waitrose' recipe. It's delicious!
P.S. I have tried making mint tea by just pouring boiling water on three/four dried leaves from last year, and letting it brew. Tasty and refreshing.

P.P.S. My current mint is all spearmint, but a friend has just given me a peppermint cutting, so I will be experimenting with that soon!
Posted by M.Paola Andreoni at 22:25

We drank a lot of mint tea in Morocco last year... it's very good and quite refreshing!