Celery RIP in the midst of lush growth

I am back after a week or so and all the celery that I planted out is gone, all but one (ONE) seedling - no remains whatsoever so it was slugs, the mean slimy creatures - regret saying that their activity was less than usual... I have also lost all my tomatillos in the greenhouse to some or other hungry invertebrate, but all the rest was fine - thanks mainly to Carol who offered to keep an eye on them.

Outside, the growth was generally lush - including the weeds - with gooseberries and currants well under development; strawberries, blueberries and broad beans in flower, my first ever radishes ready and I also got the first vestiges of mushrooms!!! 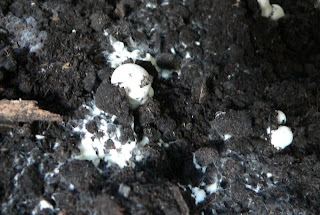 A major sowing session is required to catch up now.
By the way, I renew my offer for borage seedlings and raspberry shoots if anyone is interested. I also have some periwinkle Vinca major, mint, hazels, a little maple, St John's wort, rosemary and tiny beech all grown from seed or cuttings and all looking for a welcoming home.
Posted by M.Paola Andreoni at 13:35