Cleaning up after the Romans (Week 4, Tuesday)

Since I moved to the UK I get that a lot: where are you from? Italy? Oh, the Romans were great... or something like that, for example: do you see that weed, Smyrnium, the Roman introduced it to England... ;p

It would be fair to point out that not all Italians feel they are descendants of the Romans (that would be people in Rome) most of the rest of Italy was just conquered, as was England... if it makes any sense to attribute oneself an ascendancy at all, then it would be the ones they thought me in school: we people of Lombardy descend from the Germanic tribe of the Lombards. There, I've said it!

Anyway, I'm happy to clean after the Romans, if that helps. And that is basically what I've been doing since I came here. I'm talking about Smyrnium, of course.

In 2005 I landed in the UK and one of the first things I did was to take part in a volunteer day at Kew to clear this weed. One year later, I took part again. Look what I dug out of my archives. 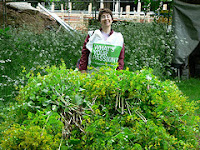 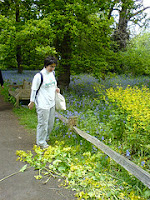 Then, in 2007, I was looking forward to the event once again, but I was told Kew was clear of Smyrnium [disappointment]. 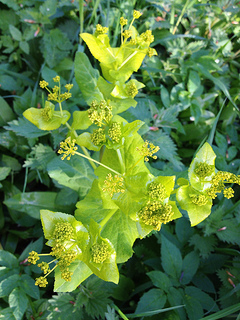 Well. it's back, alive and kicking, and we are going to spend a few man-hours on it, before it gets too rampant. 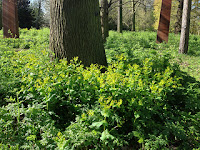 I did a short research online. It appears that the Romans introduced so-called alexanders, Smyrnium olusatrum (a plant whose all parts are edible, apparently tasting of celery, and including the seeds as a substitute for black pepper). The weed we have a problem with, however, is the perfoliatum species (also edible but used as an ornamental because of the striking yellow-green leaves around the inflorescence).

And we thank goodness for the striking appearance of the perfoliatum, because it stands out and is easy to spot even from a distance and in long grass when we are after it. By the way, amidst the long grass and weeds, we found a couple of beauties of the Bufo bufo species: what a treat. 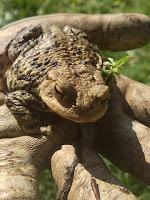 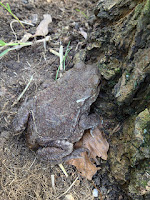