Zen and the art of leaf gathering (Week 2, Friday)

It was with some hesitation that this morning I made my way to the Japanese Landscape. It is a rather formal garden, and working on it felt pretty daunting.

Edging, which by now I can do fairly well, and picking up the magnolia leaves that the inclement weather has scattered all over the place the tasks for the day, together with re-doing the lines in the raked gravel that represents the flowing of water. 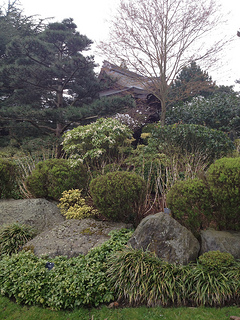 With magnolias, camellias, cherries and photinias in flower, the place looked really marvellous, despite the gray sky. The landscape has a fascinating history, built as it is around the Gateway (a replica of a temple in Kyoto) and attracts plenty of visitors, but somehow it also manages to retain a spiritual character. Which I found out when gathering and picking up leaves.

There were a few gusts of wind, and each one would scatter part of the light and somewhat sticky leaves I had managed to scrape out of the grass and bushes, while also blowing new leaves from the tree. Something that can be pretty annoying, as I'm sure you know. However, a thought came into my mind.

I remembered a book on mindfulness I recently flicked through, by Thich Nhat Hanh. The Vietnamese Zen monk suggested that happiness is only found in mindfulness and mindfulness in performing an action for the sake of it, by concentrating completely on it, bringing back one's attention every time it goes astray and observing and acknowledging one's distractions as they happen to avoid them being more distracting... this was a concept I had been familiar for a while, since I became interested in Hinduism while studying Religious Studies. It was guru Osho - if I recollect well - that said that our mind gets distracted by wandering into either the past or the future, preventing us from enjoying the moment. I think it is one of the reasons I like gardening so much: because it absorbs me completely in the task at hand, and I can relax.

So I thought of my leaves, and concentrated in picking them up for the sake of it. One leaf at a time, one handful at a time, one bucket at a time. It was refreshing and made me think that there's so much that is like picking leaves just to look them fall again. If you let it get at you, then you cannot but get angry and bitter. But if you keep carrying on as if nothing had ever happened before, or was going to happen again, then you are leaving in the moment, and can find peace.

All my phylosphical musings crashed suddenly into reality when the student I was working with suggested I learnt how to use the leafblower, which I did, after the by-now-usual feeling of awkwardness when starting to use a new tool around people.

Here is me, posing as a ghostbuster, before going in for lunch... 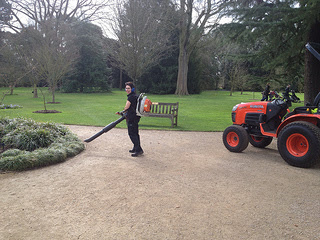