The Rosaceae family of plants, and the sub-family Maloidae (those with pome fruits) in particular, are affected by fireblight, which is a disease caused by bacterium Erwinia amylovora; it affects blossom and shoots and may lead to the death of the plant.

Fireblight used to be a notifiable disease, and governments are still trying to keep it in check and confined to the already affected areas (in the UK, it is still not established in most of the isles). You can read more about fireblight on the Defra factsheet, or on the Missouri Botanical Garden and  RHS websites. 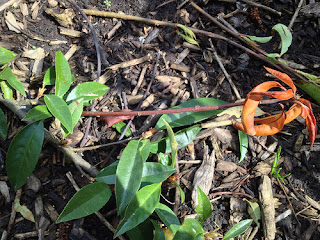 In our area we will have to identify and monitor the spread of the disease as it starts to flare up later in the spring. Any plant material affected needs to go to the incinerator.

By the way, here is how fireblight looks on a Photinia, just as if it had been scorched by fire. And inside the stem, there is orange-brown staining, sometimes in a longitudinal stripe, other times it goes around a ring in the stem (which may cause

Stone fruits, the plants in the Rosaceae family that do not get fireblight, apparently catch silverleaf instead, caused by fungus Chondrostereum purpureum.

By the way, do  you know an easy way to recognise a plant in the Rosaceae family? I was told it has five petal and five sepals to the flower, and two stipules for each leaf, like below. 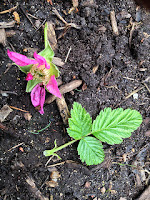 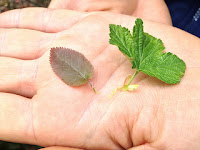 Today I was on my own taking forward the edging and clearing of the South Canal beds, so I was assigned a volunteer to help. There are plenty of really nice volunteers that come and help us one day a week, and the volunteer that helped me was a gardener, studying garden design and interested in permaculture. While digging out a large patch of ground elder (aka Aegopodium podagraria) we had an interesting chat, and I mentioned to him hugelkultur, which I had learnt from @carllegge, who introduced me to permaculture. Here's an interesting short piece about it, discussing especially its sustainability.

I had been thinking about it because soil at Kew is sandy and sand dries up quickly, and will research it better as soon as I have more time.
Posted by M.Paola Andreoni at 23:00