"Herbaria are collections of dried preserved specimens that document the identity of plants and fungi. They represent reference collections with many and varied functions including identification, research and education".

Fascinating. Today we were taken on a tour of the herbarium by botanist David Goyder, who showed us some specimens and told us about his trips in Africa to get them. 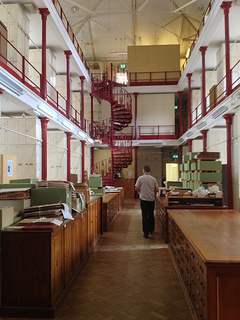 The old storage room is itself redolent of Victorian explorers and scientists: discovering, preserving, studying... and it is a joy to look at. It was designed to make use of as much daylight as possible, as lighting + dried plant material preserved on paper sheets = big fire hazard. 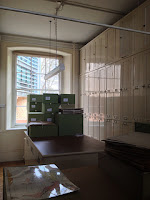 When you take into consideration that the cupboards (here and in other more modern parts of the building, as this was filled to capacity shortly after being created) contain 7.5 million specimens, some 350,000 of which are type specimens, that is the "official" description of how a plants looks like for reference and identification, then you really feel how extraordinary this place is. 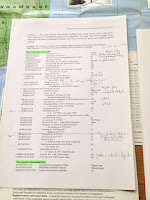 David talked to us about two recent expeditions he did in Africa, his geographical area of expertise, during one of which, in Mozambique, they discovered a full A4 page of species new to science.

Discoveries like that one are often presented to governments with conservation purposes in mind.

Then we were shown some specimens he has dried but not fully identified yet, as they are from his most recent trip to Angola. As expeditions are rather expensive, one has to concentrate on getting a representative selection of the local flora, collecting specimens and avoiding they get damaged (i.e. mould). All the rest can be done once you are back at the Herbarium, where you can consult previous collections to help you identify your specimens (redundant collections are welcome because they document the variety within and/or distribution of species) or any species new to science.

David also showed  us an identified specimen from the expedition to Mozambique, and one of the reference specimens they consulted, from the collections, when identifying plants; it's by 19th century Scottish missionary and explorer David Livingstone (more about his correspondence with Kew).

I would go on talking about this fascinating subject, but everything is explained on Kew's website... I will tell you, however, that Kew has started digitizing the collections and some are already available to all through the Herbarium catalogue, as I find that rather amazing.

If you are into the expedition side of plant finding, I found Kew's Overseas Territories team blog that might be of interest.

For those interested in plant genetics, we might visit the Jodrell Laboratory at some stage, but for the moment, what I have learnt is that you might be able to find viable DNA material in specimens that have been dried quickly and are less that 20 years old.

And on that bombshell...
Posted by M.Paola Andreoni at 18:56