Another day of bed maintenance, which is what we are here to do!

I am now mostly self-sufficient in getting the tools together before starting the day, such a relief! :) When I first joined I had a locker assigned to me with a standard kit, then, over the last two weeks, I have collected a selection of other bits and pieces I need, like a hand-fork (can you believe gardeners' hand-forks are one of the most often stolen items if left lying around?!?) and a knee pad. There are other tools in the shed that are there for specific jobs, for example landscape and lawn rakes (the light ones you can use on grass because they do not rip it up as the heavier ones do), saws etc.

The bin bags are for the non-compostable weeds and also for all the plastic bits and foil wrappers that we keep finding stuck in between plants and pretty much everywhere in the beds. 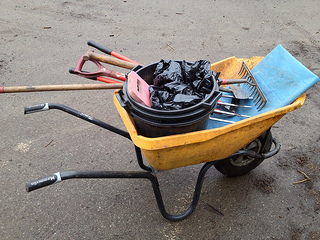 Anyway, today we tackled Cotoneaster as well as Rubus. Here's a before and after pic (have to remember to take them from the same angle perspective in the in the future): 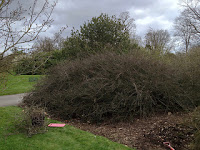 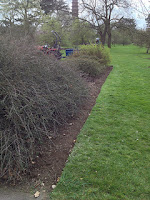 While cleaning up, I unearthed a millipede I had not seen before, which Paul Lee at the British Myriapod and  Isopod Group very kindly helped me identify as a flat-back millipede of the genus Polydesmus.  Apparently there are 5 species that look very similar in the UK, and you need to inspect the underside with a lens/microscope to find out exactly which is which. Fascinating, isn't it? 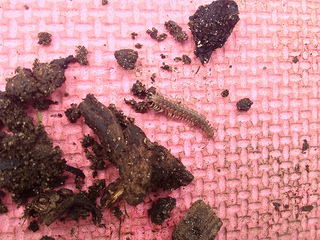 By the way, do you know which is the rough rule of thumb to distinguish centipedes from millipedes? Centipedes have only one pair of legs per body segment, millipedes have two.

I was taught that centipedes, 1 pair of leg = good in gardening terms, as they are mainly carnivores. Millipedes, 2 pairs of legs = less good from a gardening perspective as they might feed on roots and seedlings even though they are mostly detrivores. But I am not endorsing any violence on them, I think a healthy ecosystem, with as many species as possible, is the best environment for plants to thrive in, and detrivores are really useful for the recycling of nutrients. The little fellow there was left to go about its business straight after I took the picture.

We, on the other hand, were stopped halfway through our work in the beds by a sudden thunderstorm, so had to head in in a rush.

After work, however, the weather was sunny again and, if anything, Kew looked more gorgeous for the shower, so I went on a plant IDing round... it's such a privilege to be here every day!