Watering with a bowser (Week 9, Tuesday)

Today I was trained in using a watering bowser, and then set off with a map of the gardens and a list of the recently planted trees to water. We only water those small trees that need to establish, generally the ones planted in the last two years.

I simply loved the experience, for two main reasons:

The areas I covered had mainly Leguminosae and conifers in them, and I enjoyed two plants in particular. 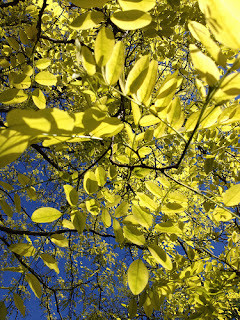 A Robinia pseudo-acacia 'Aurea', whose foliage, against the blue sky, was really stunningly beautiful. And anyway I like robinias because they remind me of wood fire in the mountains, when I was a kid, and of my favourite streets in Milan. 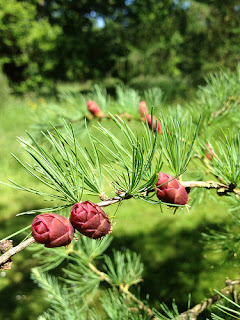 A Larix laricina, or tamarack, which I had never seen before, and whose cones left me gobsmacked:  as beautiful as the best deep red rosebuds.

I do not know much about conifers, had never considered them much, but working amongst them today gave me an opportunity to have a close look and realise that what we call mountain "pini" in Italy (with short needles and Christmas-tree shape) are actually mainly in the Abies and Picea genera, while only the maritime "pini" (with long needles and round canopy) are in the genus Pinus. Will have to investigate further.

I also had time to observe Cupressaceae Thuja and Chamaecyparis up closer, which look almost identical at first sight; I think I have come to the conclusion that the former has flat scales on a flat branch, while the latter has somewhat raised scales on a flat branch. Will have to make sure some other day, as my watering time had run out.

Back to the bowser, it is fairly easy to use.

The bowser is a big tank with a pump to draw the water out of it and into the attached hose pipe. First of all, you have to attach it as a trailer to a tractor to carry it around. 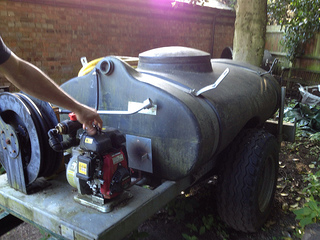 Then you have to do general checks:

Having checked everything is ok, you have to take some fuel with you in a safe storage box and then set off to your daily duties.

One has to turn on the safety fuel switch to allow fuel into the engine, as it will be off when not in use.

The bowser pump is two-stroke, so there is a choke to use for cold starts at the beginning of the day.

The engine is regulated by the RPMs lever, which needs to be higher up than "turtle" (the slow setting) but not quite on "hare" (the fast setting) before you turn on the engine switch and then pull on the starting rope, every time yoo arrive to your location. When you are finished with it, you turn everything off and move on to the next plant.

To stretch the hosepipe to the length you need, you unroll it from the wheel and stop when you hear the cogwheel mechanism click into place. The water is released into the hosepipe when the lever is flush with the pipe.

Well, that's the techie bit sorted, and you get the rest of the time to enjoy the plants and the gardens: I'm really looking forward to the next time I have to water again!
Posted by M.Paola Andreoni at 21:40