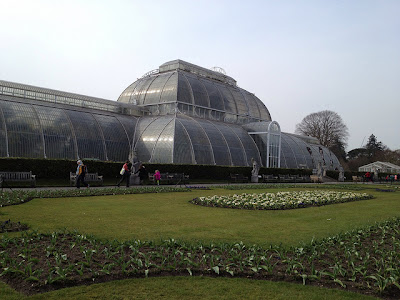 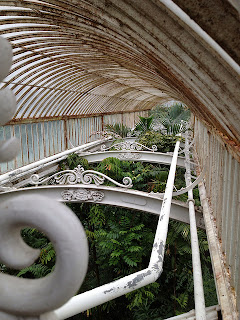 We had a tour of the Palm House today, one of the few remaining greenhouses that were built with wrought iron, a revolutionary technique of its time, thanks to which the arcs of metal could span more distance.


It dates back to the 1840s, and sits next to the later Waterlily House that is managed together with it. 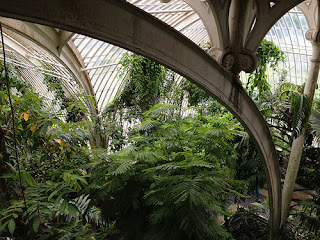 Besides the palms that give it its name, the collection covers the tropical rainforest, from north to south respectively: Asia, Americas & Africa (with some allowance made for the tallest plants to sit in the highest part). 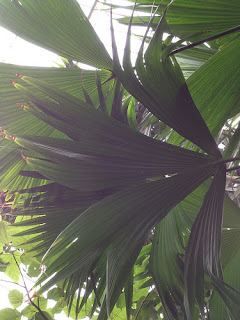 At the moment a lot of emphasis is given to food crops as part of the IncrEdibles festival running this summer. We saw:

We manage to get fruit nonetheless, because bananas are parthenocarpic, and that is an advantage from the commercial point of view because they do not contain viable seeds, but certainly not from an evolutionary one!. Interestingly, banans are not trees as such, they are herbs, and their stems are not woody stems, but soft and formed by the leaf sheets that are closely packed together. In the picture below, you can see it is sometimes necessary to keep them together with support bands! 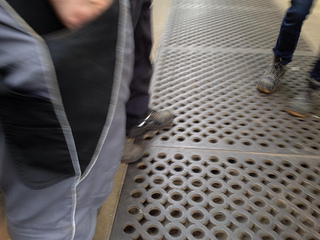 Back to the fascinating history of the Palm House, we learnt that it was originally heated through burning coal in the Campanile at Victoria gate, which heated water that then ran in pipes in a tunnel to the House and then through the iron grating in the floor that are still visible today.


At the extremities of the house there are benches that were originally used for potting on, but now are display areas, plants are kept in pots to remind us of their original purpose. Some of the palms in those area, you will notice, are also planted in crates, which - besides being very convenient for potting on - are the way in which plants were originally displayed in the Palm House. 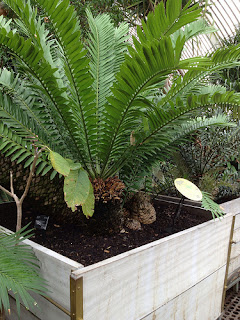 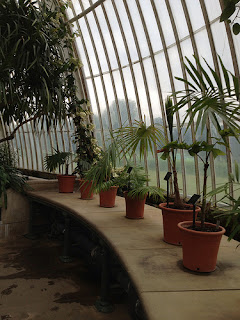 I must say I did love the Waterlily House in particular, because it was so cosy and planted with more foodcrops: ones I love in my own garden, like chilli and shark fin melons. It was also really exciting to see the underside of the leaves of Victoria cruziana, the giant waterlily, which have ribs that trap air to help them float and are spiny to fend off the attacks of fish: amazing plants... 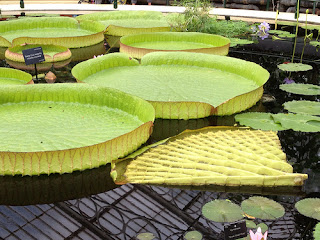