Coming to work to Kew has made me want to sing, something I had not done for a long while. Since I am driving for a minimum of 1.5 hrs/day, that's been a good opportunity to practice in an isolated space, where my out-of-shape, shaky voice, that could not reach up to high notes any longer, was not going to disgrace me in the eyes of anyone :) After trying out a few CDs, I have stuck with Grease the musical pretty much throughout the three months, so I now know it all almost by heart, hence the idea for the title today.

Not really to do with prom nights, but it is my last day on the South Canal beds (at least for a while), but it was raining today, which slowed me down considerably even though I was working under cover of some trees. As a result, I have not finished what I was planning to do, and, even though I did not end up with flu (as the song goes), I felt a bit like the 'cruel force of nature' was doing it on purpose to spoil my plans! Anyway, we desperately needed rain and it is highly likely I will come back to the South Canal beds after my stint in the nursery, so not much of a deal, really.

It was mainly about clearing bindweed, the last of the garlic mustard from the other day, overgrown Rubus, and a couple of large bryony (Bryonia dioica) and bittersweet (Solanum dulcamara) plants. Oh, and the usual self-seeded Cotoneaster, grown to shrub size, unnoticed in a hidden spot.

Here are some before and after pictures: 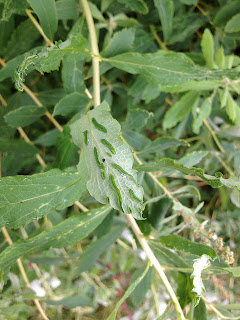 I seem always to find something that fascinates me, when I work with plants, even in the more mundane of tasks, like weeding and cutting back. Today, I found this Spirea leaf, and then a few others like it. Something obviously went wrong when cells were dividing to make the leaf lobed and dented, which is obviously not a simple pattern, as any of you that are knitters know (casting on and slipping stitches...). The leaves (like a bad knitter might do) seem to have produced too much tissue, which got grafted in the required shape, with all excess just curled up underneath the leaf...
Posted by M.Paola Andreoni at 08:56