Back from my study leave and RHS Level 3 exam (that was a long day, as I was taking the first part early in the morning and the last one in the afternoon) I knew I would have to take care of a work experience lad for the day.

My main objective for the next two days is to finish weeding and bringing plants back to their allotted space in one of the middle beds, so that on Sunday I can come in and finish my stock-checking exercise. I am under a bit of self-imposed pressure because I want to finish it all. That is because for the next two weeks I have been given the opportunity to work in the arboretum nursery (something that is not normally on the interns' training plan, so I'm rather proud of it).

Anyway, weeding is what needs doing at the moment so I asked the lad to help with it. To give him something a bit different to do I had also saved a Rubus for pulling out - it had grown into another one, difficult to spot even though the leaves of the species were quite different, but, at this time of the year, one was in flower, while the other one was fruiting already. So I asked him to have a good look at the plant and see if he could spot anything strange, and he did!

A lad with an eye for plants, and showing more interest than others we have had working with us, deserved full attention, so I tried to keep his interest going and it was good that I had all my botany fresh from the exam.

In an area with a lot of suckering plants, we talked about suckers and how they take good energy from a plant and therefore need to be cut back, especially when the plant is grafted and it is the rootstock that suckers: just recently we found two Crataegus in my area where the rootstock had taken over and the scion had died.

When digging out enchanter's nightshade (Circaea lutetiana), of which there was a large patch engulfing a couple of Spiraeas, we discussed rhizomes being underground stems and how if any is left in the soil they will come out again. 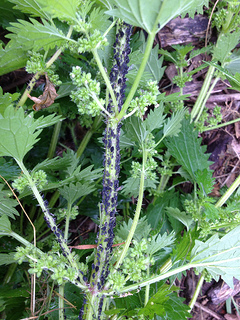 As we run into a bunch of mushrooms in the mulch, and he wanted to hoe them, we had an opportunity to talk about micorrhyzae and how they are useful to plants, and some nettles covered in aphids were the opportunity to talk about biocontrol by attracting beneficial insects, and parasitoid wasps Aphidium and Aphelinus and midge Aphidoletes that use aphids as their egg-case.

I enjoyed talking about plants, and the lad did notice (and remarked) how passionate I am about them!
Posted by M.Paola Andreoni at 08:55