Weeding week this week, and having done with the front of a bed, I decided to step inside, behind a wall of Spiraea... where I found what I can only define as a plantation of garlic mustard (Alliaria petiolata) aka Jack-by-the-hedge! 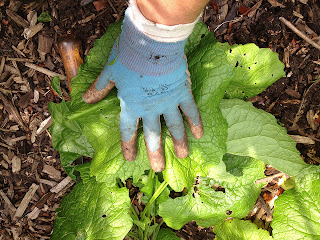 It was actually quite something:  I had never seen so much garlic mustard together, and certainly not leaves larger than my hand; definitely thriving back there in the shade.

I have never made use of this herb of the Brassicaceae family, which is said to taste of garlic and mustard. It certainly smell garlicky when being pulled out.


It is a biennial, with the first year's leaves reniform, auriculate at the base, crenate at the margins.

The second year's leaves are alternate on the stems and cordate. The flowers, with four petals as it is the characteristic of the family (previously called Cruciferae because of the cross-like shape of the flowers) are white and grouped in racemes. 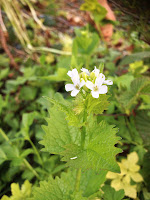 Garlic mustard is said to be good for wildlife:


Garlic mustard is famously the larval food plant of the Orange-tip butterfly particularly on damper more open sites such as riverbanks. Look out for the orange eggs laid just behind the flower. Less well known is its importance as the food plant for the caterpillars of green-veined whites.*

I found an unidentified caterpillar (not the larva of either those butterflies) a pretty and beneficial predator, Cantharis rustica, with its heart-shaped spot on the thorax, on one of the leaves. 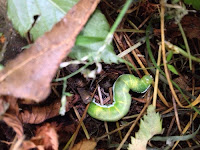 The middle of a bed that I have to stockcheck is however not the place for those pretty plants to grow, so I started work on them and it took longer than one day to clear the whole patch properly. A couple of pictures from the end of the first day. 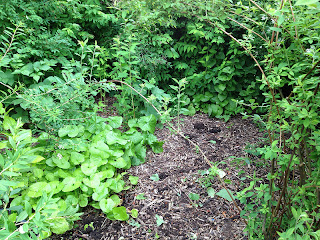 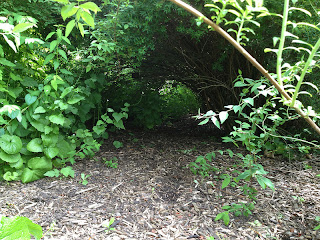