I was not familiar with the genus Neillia before I spent a whole afternoon digging ground elder from under one. That was an opportunity to become closely acquainted; I took the pictures below. 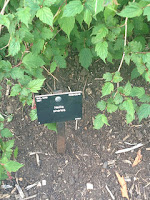 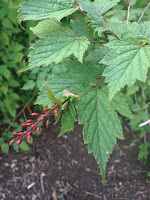 There is probably a reason why I did not know Neillia, and it's because there doesn't seem to be much information around about them.

Originally from China, there are 16 species whose name has been accepted in the genus. As it is in the Rosaceae family, there are quite a few specimens in the South Canal beds. Deciduous shrubs, originally from Asia, with arched branches; some of the species are suckering. Leaves are alternate, lobed, ovate to ovate-oblong and toothed, which may turn yellow to red in autumn. Flowers are various shades of pink, borne on racemes, and bloom in late spring to early summer.

After my first encounter with the species, when stock-checking, I came across a label Rhodotypos scandens that was not apparently associated with a plant of that name. I researched online on the Missouri Botanical Garden website and there was definitely no Rhodotypos around. I was pretty sure there was an unlabelled Neillia there, though... 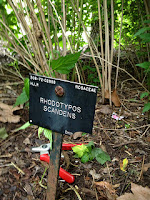 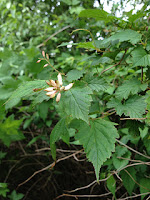 ... and, again when stock-checking another day, I came across another Neillia, a puny rubiflora that looked surrounded by weeds. On closer look, there was a Prunus of some sort poking out from its back... given that I always have my secateurs on me and that I cannot stand stumps I cut the Prunus so it stood out as an eyesore for me to notice next time I was doing weeding.

By the way, stumps are not only ugly from an aesthetic point of view: it is bad horticultural practice to leave random bits of wood when pruning, as they will die back and possibly act as the entrance point for diseases and fungi such as coral spot. 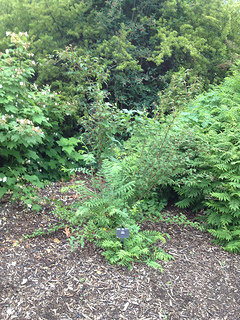 Anyway, my devious strategem worked, and, today, while weeding I spotted the stump straight away and set about to free the poor Neillia of the intruder... well, actually, it turned out to be intruders - plural... 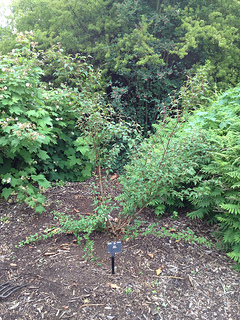 ... a  red bryony,  Prunus, Crataegus and Sorbaria later... it became apparent it had become a bit overcrowded around there, as the Neillia had obviously escaped attention. Anyway, all sorted now, we should have a happier plant!

*A branch collar is the ridge that a branch forms where it joins the stem. A fantastic colleague taught us that the collar is still part of the main stem, from which the branch emerges (it originates where a bud was sited, fed by a branch in the vascular system deep inside the stem). When you cut the branch, you should not cut into the main stem: that way, the wound will heal quicker, and, ideally, in a number of years, be completely covered by the stem's bark. Below a few pictures:


** If a branch or stem is cut in the wrong position, the stump will die back and possibly congest the plant/be in the way of new growth; the same is true when the stem is cut at the soil level. A plant should be planted at the depth of its root flare, but I guess the exact spot where to cut is a matter of experience and observation. As Rossana would say: look at the plant and the way it grows; and, in the case of pruning, feel the bark, the collar, look at how the branch emerges from the stem, clear the soil all around the plant base and find the root flare. In the picture below, you can see some stumps that died back and are in the way of a new bud: not a good cut. 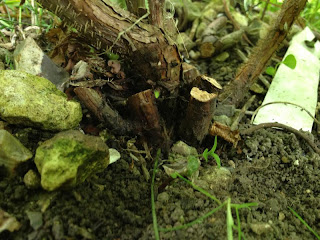 hello what is a branch collar ? and right down to the ground, is that to soil level? obvious questions probably. I am hopeless at pruning xx

Joanna, I have added notes to the post with a few pictures more than I shared already. Do let me know if there is still anything I could explain better please.