After a visit to the Herbarium, we couldn't miss the Fungarium. 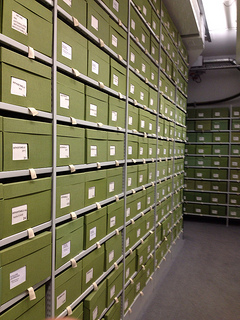 What an amazing place! A fungarium is a collection of dried specimens, and Kew collection was recently complemented with a donation by CABI, to create one of the largest collection in the world. It contains 1.25 m specimens, including plenty of types - ca 45,000, and is continually growing, at the rate of ca 5,000 specimens a year.

Fungi are fascinating: not a plant, nor an animal, they make up a taxonomic kingdom of their own, their distinguishing characteristic being they contain chetin in their cell walls (plants contain cellulose instead) like that in the exoskeleton of insects. We know comparatively little about fungi, and reclassification is continually happening: our knowledgeable, and most entertaining, guide for the day, Begoña Aguirre-Hudson, mentioned three taxonomic reorganisations since she has been taking care of the collection...

... she features in a Kew video, about fungi and the Fungarium, available on YouTube, by the way.

We were shown an interesting selection of specimens: one collected by Darwin (which is more valuable from a historical point of view than for its scientific value: Darwin apparently preserved his specimens in port wine for lack of anything else, so they are not well preserved!) One was the renowned Chinese caterpillar fungus (a clever parasite of the caterpillar, indeed) and potato blight... plus some dried porcini, Amanita and giant puffballs... 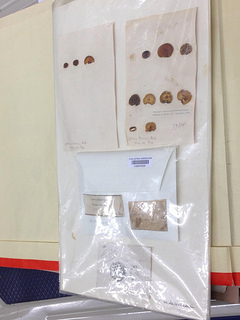 The mycology department, where the Fungarium is located, also includes a lab where mushrooms are collected, cleaned, analysed, their genetic material extracted for any necessary DNA testing, and then dried to be added to the collection. 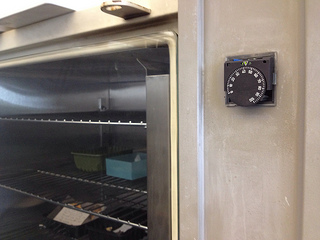 A special machine ensures the fungi are quickly dried at a low enough temperature to preserve their genetic material (40°C). Then they go into a freezer that can reach a temperature of -35°C so that all insects that might damage the specimen, and their eggs, are killed.

The specimens need to be packeted, glued to the archival paper and archived by hand.

They are also being digitised: records are available in the HerbIMI database, while a project is ongoing to get high resolution images of all the collections.

We were also given a leaflet on fungi: do you know why we really really need them? 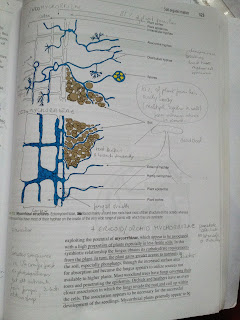 As a horticulturist, I am fascinated by mycorrhizae, such an amazing symbiotic relationship. One plant in US conifer forests, Sarcodes sanguinea, is completely unable to photosynthesize and gets all its nutrients from mycorrhizae! In the annotated picture from my RHS Level 3 exam (Adams, Bamford, Early Principles of Horticulture, Butterworth-Heinemann) there is some explanation of the two main types of mycorrhizae: endomycorrhyzae that penetrate root cells, and ectomycorrhyzae that extend into intercellular spaces.

But fungi are interesting in themselves: take mycelium for example, the matter of which fungi are made. It looks like threads, arranging in the formations called hypae, in its underground life. Then it arranges to form fruiting bodies: the mushrooms (i.e. the familiar toadstools or brackets on trees) to produce spores through which fungi reproduce. But they may also organise in rhizomorphs (the bootlace structures that i.e. honey fungus uses to absorbe nutrients) and sclerotia (hard masses of resting spores that remain in soil until the right conditions happen for vegetative development). Some of these structures are so different that different stages of a fungus' lifecycle had been identified as different fungi (one of the reasons why re-classification is taking place all the time)...

I won't even attempt to go into the systematics of fungi: the way fungi are grouped, based of their features (mobile spores, spores in a sac or in a club etc) and modes of reproduction (sexual, asexual or both...). If  you want to know more about it, I found book Pest, Diseases & Disorders of Garden Plants by Buczacki & Harris quite comprehensive
Posted by M.Paola Andreoni at 20:59