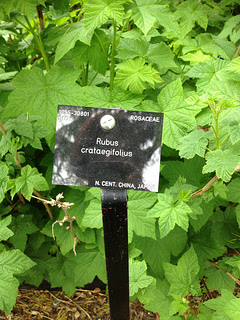 To anyone that has ever seen a Crataegus, this must be a mistery. Why this Rubus is called crataegifolius (with leaves like Crataegus), I mean. No similarity whatsoever to a Crataegus (not that this is an isolated mystery case: have you ever seen a Spiraea betulifolia?). Anyway, if anything the palmatifid leaves with bidentate margins resemble an Acer. They are a pleasant deep green, slightly lighter when young.

And I have decided this is my favourite Rubus ever. 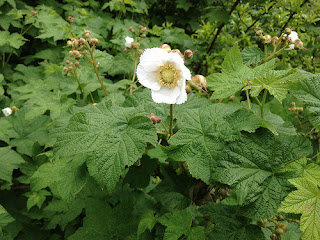 With flowers very much like small anemones, hairs rather than spines, and leaves that - brushed - release a bitter lemon scent, which rubs off on your skin, this Rubus is a joy to work with!

It is, however, rather rampant. I had worked on it when it was just dormant stems, bringing it back into its containing rubber band. At the time I had noticed there was an extra rather self-contained Rubus clump at the back, which we could not safely identify as just an offshoot of the R. crataegifolius. 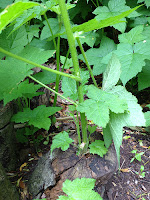 Today I was weeding the bed next to the one in which this Rubus is, when one of the Wednesday volunteers joined me, sent by the manager. He started edging the bed and asked me what to do with all the Rubus shoots that were coming out. Literally from everywhere, including tree stumps!

You know I can't resist the call of a Rubus, so the two of us started tackling the shoots, and then we realised that the two clumps had joined again and were actually the same plant, even though the one outside the rubber band was more vigorous than the one inside.


Something I have already noticed with Rubus and mentioned to the management. After a while inside the rubber band, they expand outwards, and get weaker inside.

The soil is probably depleted of nutrients, and the plants get congested anyway... so it would really be better to keep the vigorous ones outside the bands and clear the weak ones inside, since propagation by division can be done with suckering plants like Rubus (the conventional way would be to propagate them through cuttings in the nursery and then plant them out somewhere).

Anyway, in the end we decided that I would tackle the Rubus on a more radical basis, while the volunteer went on edging. I could not pull out the vigorous clump, it was too good, and there was a suitable space where it had established. But I cleared all the shoots in between the two clumps and cut them back to where they would not encroach on any of the neighbouring plants. 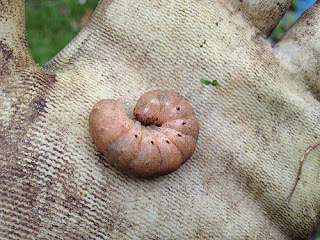 By the way, in the soil I found this chubby little chap, which I could not identify: I wonder what it will become! If anyone knows...