This morning we were shown the very basics of how to cloud-prune a conifer, a Pinus nigra to be precise, in the Japanese gateway. Cloud pruning is in fact a Japanese technique of topiary that is used on garden trees and bonsai: it is so called because the branches look like clouds with their rounded clusters of foliage.

The branches of the small tree are tied to canes so that they are lowered almost at a right angle to the trunk. Then the foliage has to be taken care of. 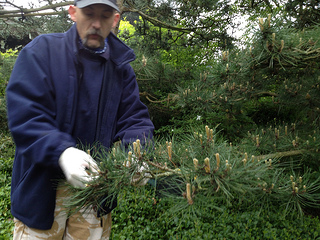 The way it is done at the Japanese gateway on the pines, is that in spring, before they become too tough, all the "candles" and budding pinecones are snapped off by hand. At the same time, and again in the autumn, any needles too many (and in particular those that protrude downwards) are pulled away, so that, looking upwards from below a branch, the tufts of needles appear as if they are floating over the branches.


After the demonstration, we went back to the beds, where I went on clearing the ground elder under Rubus, Spiraea and Neillia shrubs and cutting back some weedy Sorbaria. Here are a couple of pictures of before and after.

Thanks for the feedback, Steven, happy you enjoyed the post.