An unusual day, today: I joined in to assist a colleague who was leading the activities of a team of corporate volunteers on a teamwork day. 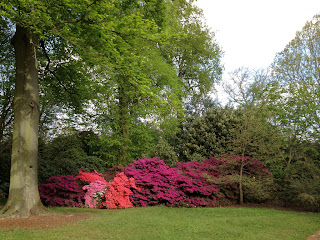 The azaleas are coming into flower and we forecast the Azalea Garden will major as an attraction for tourists at the weekend, so the volunteers were asked to help weed and edge the azaleas' beds.

While waiting for the 20 or so strong team to arrive on site, I had a walk round the circles of beds, each section containing one of 12 hybrid groups in chronological order of breeding, with highlights:

I took a few shots as well:
by the way, if you were wondering, azaleas all belong to the genus Rhododendron (they were originally considered different but have now been reclassified). The US National Arboretum defines them for the layperson as:

When the volunteers arrived, my colleague introduced them to the task at hand and showed them how to use the tools, after which we both spent the day making sure everything went well, answering questions and helping out with the tasks and clearing.

There was some real engagement, and the beds were trim and clean in good time, so we moved on and tidied up the surrounding tree circles. The weather kept, with the exception of a shower, which rather conveniently happened around lunchtime.

At the end of the day, I asked the volunteers what they got out of the day: they enjoyed being out in the open, doing something different from their usual workday, and in such a beautiful place as Kew (some of them had never been and were keen to take their families). They do similar volunteering a couple of times a year and for us they were a welcome help. One of the ladies I chatted to mentioned she would like to do some veg gardening, but she did not feel confident enough, so we discussed easy plants to grow for a start, and I really hope she is having a go at it, because it is so rewarding!

The result of the day's work, were very visible for the team to be proud of, and for the visitors to enjoy at the weekend. 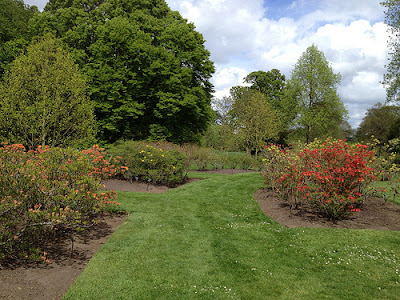