Today we found some ashes scattered under a Pyrus while weeding. And then again under another tree.

I knew that ash spreading was allowed at Kew because as soon as I started working here a friend suggested I go and visit her mum in the conservation area (which, unfortunately, I have not been able to do yet).

But finding them when we are there to clean the beds up and it is work, it feels like it is too mundane a place to find something that has that certain sacredness to it, if nothing else for the memories of all the loved ones: a rather weird experience and one does not quite know how to behave around them...

I guess the perspective of those scattering the ashes is quite different: they will enjoy the remembrance of their relative (or pet) resting in such a peaceful, beautiful place, almost the stereotype of beauty itself.

In fact, I myself experienced that sense of awe you get when in the presence of sheer beauty just this morning, while weeding Smyrnium in the dappled shade, and I wondered whether Kew might be an earthly representation of the garden of Eden... 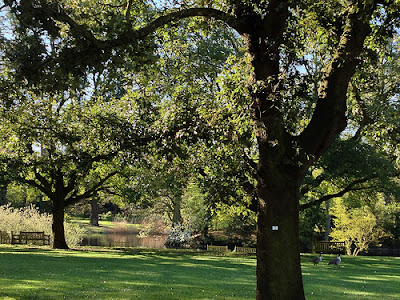 Shortly afterwards, I read @giacecco's blog post, in which he too mentions Kew as an image of paradise. And the scattering of ashes probably testifies to other people also feeling that way. 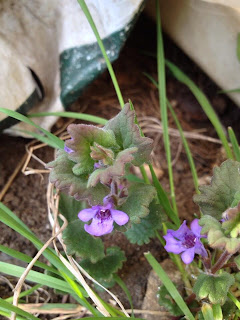 A totally different finding was my favourite Lamiaceae, a weed I usually pull out from the allotment and plant in my (wildflower meadow) front garden and whose name I had not found before. It's

PFAF says the leaves have edible uses, was apparently used in beer-making prior to hops, it's good for bees and highly invasive.

" We come from earth, we return to the earth, and in between we garden." (anon)

(had written that yesterday - when I first became aware of it - but had to move it here, it was so appropriate to today's experiences...)